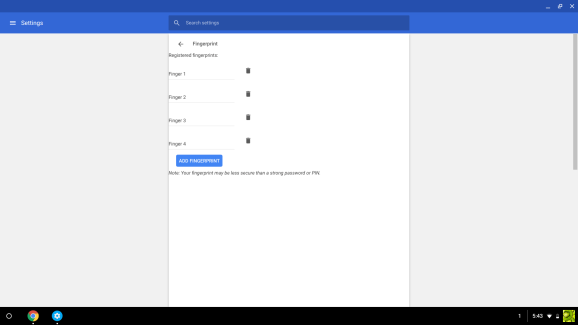 Check it out, fingerprint scanning in Chrome OS' Settings app.

Google has added a significant feature to its Chrome OS desktop operating system. The latest version of the dev channel of Chrome OS — version 58.0.3007.0 — lets you unlock your Chromebook using a fingerprint scanner.

You can enable the new Quick Unlock feature by going to chrome://flags on a Chromebook. From there you can set up the feature and then unlock the Chromebook by scanning your fingerprint, as long as you’re already signed in. Then you can go into the Settings app and configure the feature in the Screen lock section. You can register as many as five fingerprints. Chrome Story reported the news earlier today and noted that the feature’s visible in the newest Chrome OS Canary build; in fact, it was included in last week’s dev channel update.

This new type of Quick Unlock brings Chrome OS in line with iOS, Android, Windows, and, most recently, macOS. One of the features that distinguished Apple’s 2016 MacBook Pro from all previous Mac computers is its Touch ID power button with biometric authentication.