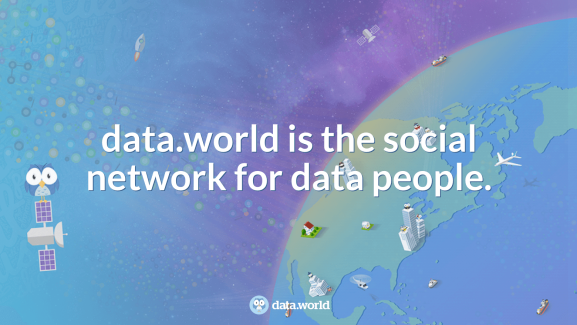 Shortage of data isn’t an issue right now, but combing through it and making sense of it is. Data.world is trying to address this by providing a social media network that allows users to connect and share different sets of data. The Austin, Texas-based startup announced today a funding round of $18.7 million.

“Even today, data collaboration too often relies on 20th century tools like email, FTP, and USB drives,” said Brett Hurt, CEO and cofounder of Data.world, in an interview with VentureBeat. “Data.world is changing that by giving everyone access to technologies that are currently only used within large, wealthy, advanced companies.”

According to Hurt, there are at least seven times as many open datasets today as there were websites at Google’s launch — that is, 2,400,000 websites in 1998 and 18,000,000 open data sets in 2016. The startup uses the Semantic Web as its framework. “We like to say that we are democratizing access to the Semantic Web, the same technology that Facebook, Google, and Palantir use,” Hurt said.

Users can sign up for free on the Data.world website, create a profile, and start importing data from any source — docs, scripts, charts, and more. The company created its own language, dwSQL, which allows users to access Data.world’s underlying semantic graph database using SQL — a more popular and universal language — instead of SPARQL, the more complex language of the Semantic Web.

Users can then visualize the imported data, filter through it, and share it on their Data.world profiles for comment or input. 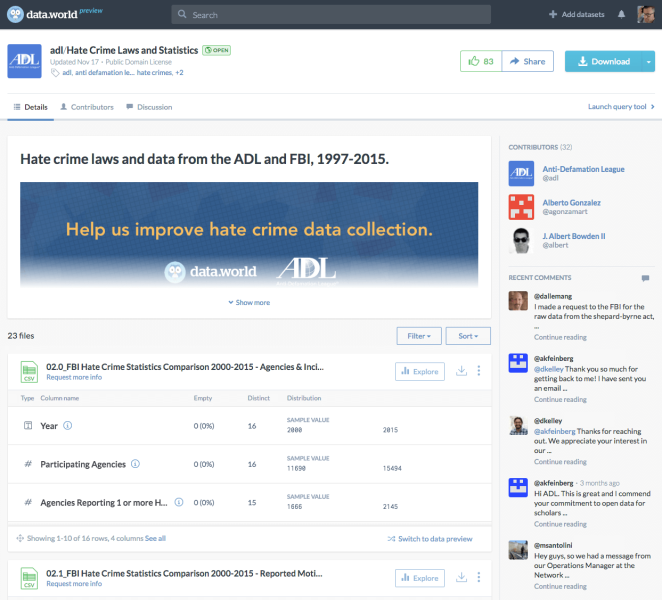 Above: Example of user sharing data

“Raw data is like crude oil: It needs to be refined to power the world,” said Hurt. “Right now, up to 80 percent of data work is spent in cleaning, formatting, and otherwise preparing the data, which leaves only 20 percent for analysis. No one likes to spend so much time on data janitorial work to get to the sexy part. We’re changing that in a big way.”

The startup’s business model is similar to GitHub’s, according to Hurt, in that the service is free unless users want to store data in a private workspace. If so, Data.world charges a small monthly fee. (Data.world is currently in preview mode, so early users aren’t being charged for private accounts at this time.)

Anyone can post on Data.world as there is no vetting process. This Wikipedia-esque way of sharing data could be worrisome in this day and age of “alternative facts.” But the social and interactive nature of the network also enables lively discussions based on data provided by the government, academic institutions, and scientific research centers.

“We don’t vet the data in advance because we firmly believe the community should decide what is useful, what is high quality, what works for them and what doesn’t,” said Hurt. “Just like Facebook and other social networks, Data.world has terms of service and rules for our community.”

Founded in 2015, Data.world’s total amount of investment to date is $32.7 million. The startup currently has 30 employees.