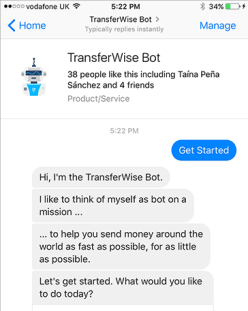 Founded out of London in 2010, TransferWise has raised around $120 million in equity funding for its peer-to-peer (P2P) international money transfer service that bypasses banks to keep costs down. The company counts some big-name backers, such as Richard Branson and PayPal cofounder Peter Thiel.

Now, TransferWise is following in the footsteps of a number of notable brands that have embraced Facebook Messenger over the past couple of years. An automated customer service bot guides users through money transfers, which can be made from the U.S., Europe, Australia, and Canada. You can also set up rate alerts through Messenger, meaning you’ll receive a daily update on rates between your preferred currencies.

“Our mission at TransferWise is to bring faster, cheaper, and more convenient international money transfers to everyone in the world,” explained Scott Miller, TransferWise head of global partnerships, in a blog post. “Building the TransferWise bot for Messenger is a great step in that direction. It’s also a powerful example of how our API can be used to seamlessly integrate TransferWise into almost any messaging, bank, or business payment system.”

Facebook first unveiled plans to grow Messenger into a platform back in 2015, one that lets retailers and businesses connect with customers directly through Facebook’s omnipresent messaging service. Facebook also now claims there are well over 30,000 chatbots on Messenger, helping people book flights, order pizzas, and more.