Zenefits, Medium, Mixpanel, Fitbit, and Uber — those are just some of the companies experiencing issues around human resources lately. Whether it’s growing teams the right way, letting people go, or dealing with diversity, HR questions have been on the back burner for entrepreneurs. But while there’s a need for more engineers and designers to build a company, the foundation for HR hasn’t been laid in many companies.

A new report published by venture capital firm Lightspeed Partners highlights recruiting trends and identifies seven things startups should think about when it comes to HR. The firm surveyed 150 early-, mid-, and late-stage companies and discovered that founders often asked what they should do first, how they should benchmark results, and how they stack up against their peers.

While many recruiting reports have been published prior to Lightspeed’s, the firm has taken a different approach, opting to buck anecdotal evidence in favor of surveying its portfolio companies. It believes that relying on anecdotes has resulted in companies making bad decisions.

1. Involve HR in all decisions around headcount 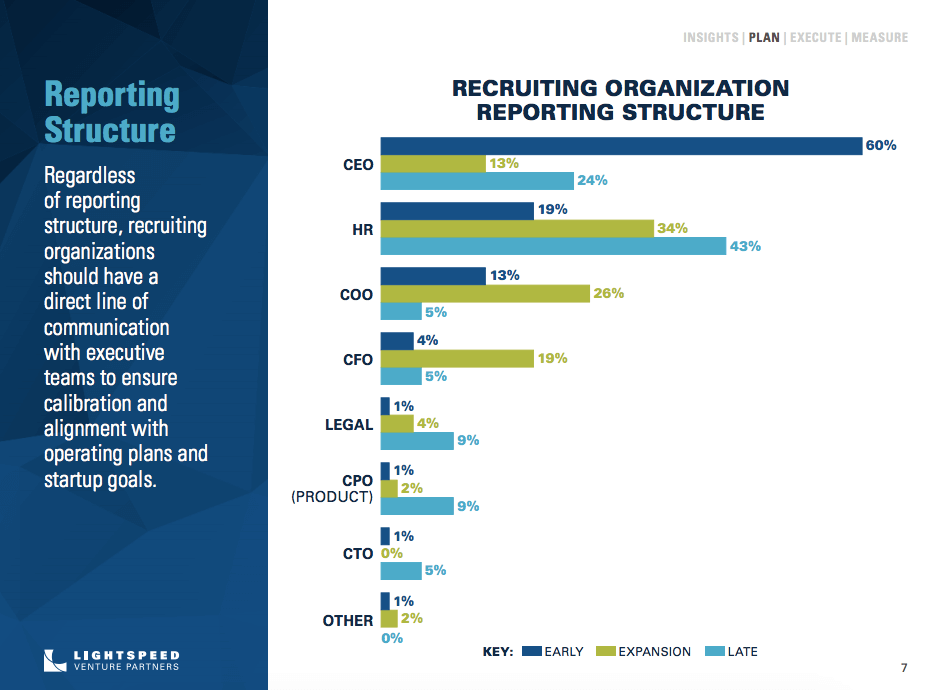 The first insight that Lightspeed identified is to make the person in charge of recruiting a member of the management team. “HR has not been a business-critical function viewed by founders,” explained the firm’s talent partner Luke Beseda in an interview with VentureBeat. “Their first in-house recruiter could be a junior or someone less experienced than an executive. When [HR] has no seat at the table, companies may set unrealistic goals for hiring.”

The report indicates that fewer than two-thirds of companies surveyed have actively involved their HR head when it comes to discussing hiring. Failure to do so could result in “misalignment between business objectives and recruiter hiring capacity,” according to Beseda. He said that whether the head of talent is involved is a main predictor “of whether you’re successful in meeting or exceeding hiring goals.” 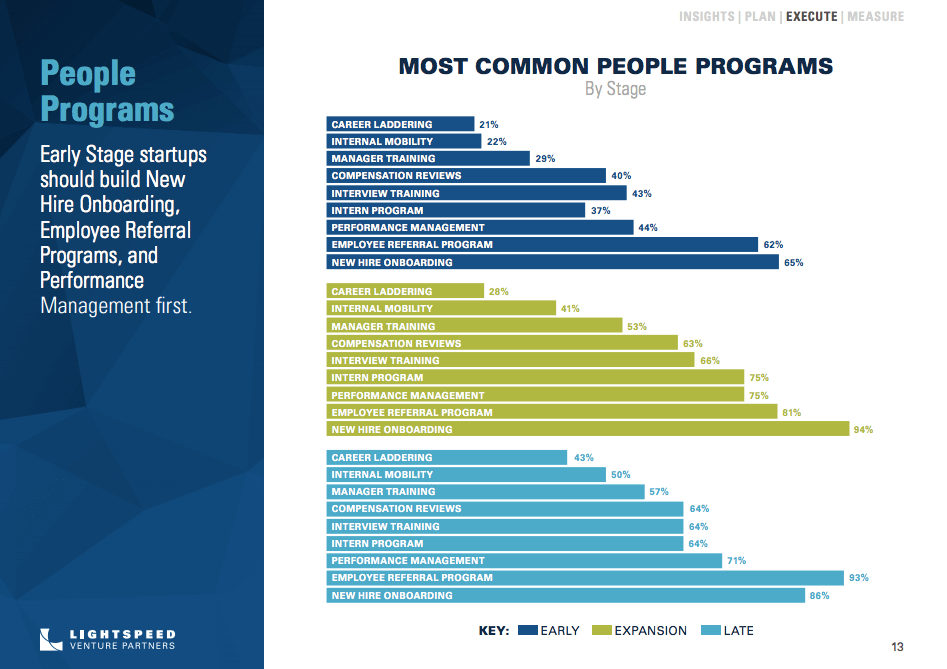 A common thought is that money isn’t everything when it comes to employment, especially in Silicon Valley. People think employees may join a company because of additional perks, including the workplace culture, but that’s not true. Lightspeed discovered that compensation and the counter offer were two main reasons why candidates passed on working at firms. In fact, culture didn’t even rank in the top five reasons for why offers were declined — other excuses included the scope of the role, location, and job title. 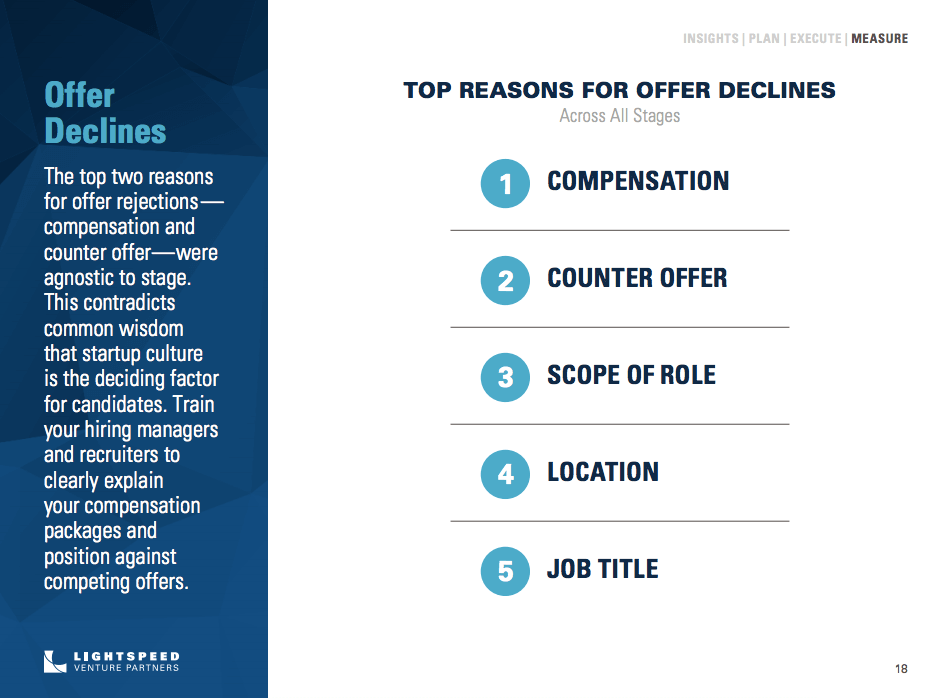 Maintaining healthy sources of talent is also important, no matter what stage your company is in. Lightspeed states that the rule of “happy thirds” holds true, meaning 1/3 of hiring should be sourced, while another 1/3 comes from general applicants and the remaining 1/3 is from employee referrals. Lightspeed advises that companies invest in their careers page, “engaging” job descriptions, and a compelling talent brand designed to lure in more inbound applications.

4. Get a recruiter dedicated to diversity

But hiring is about more than just increasing headcount — it’s about bringing on the right people. This includes having diverse teams. But less than half of those companies surveyed indicated they had a diversity hiring goal. And while diversity hires often are proactively sourced, only 4 percent of early-stage and 6 percent of mid-stage companies indicated they had a recruiter focused on this task. 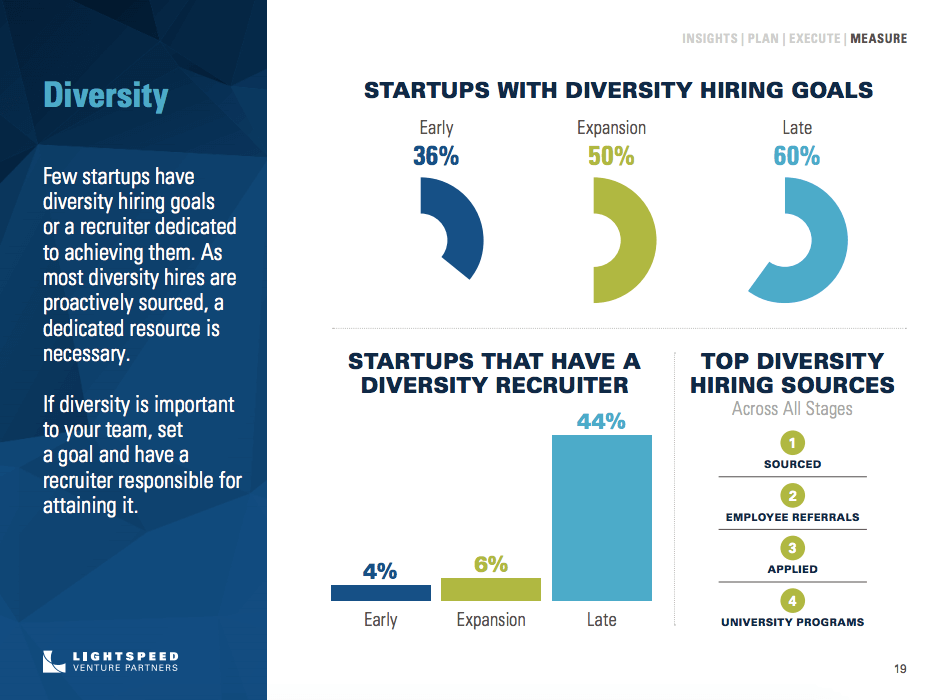 While companies invest in bringing on talent, they also need to implement programs to keep them happy. Lightspeed’s report indicates that no matter what stage the company, a lot of focus is placed on new hire on-boarding and employee referrals — but from there, things like intern placement, compensation reviews, manager training, career laddering, and internal mobility receive much less attention. As employees seek to advance and grow alongside the company, they need the programs to support them; if they don’t exist, employees will quit, which could be more expensive in the long run.

“Many companies don’t have an official headcount plan; it’s not something they prioritize,” Beseda remarked. “They hire quickly in operational easy-to-fill roles, but if it’s not tied back to product roadmap revenue goals, you could run into bloated companies. Without understanding who you’re hiring and why you’re hiring them, it can affect team productivity.” He highlights another trend, where more than 20 percent of startups fail to properly track recruiting pipeline metrics. Companies have become unable to monitor how potential candidates advance through the hiring process, and Lightspeed cautions that startups should invest more in this area.

Lastly, the report warns startups not to underinvest in their recruiting team. Companies should have the appropriate number of HR personnel to match output and headcount plans. Failure to provide an adequate number of resources could result in a higher cost per hire because of agency fees and other consequences.

The above trends may seem to be common sense and unsurprising, but Beseda believes that no action is ever taken on these insights, which means the well-known problems persist. “These are the core fundamentals that companies don’t do now that you need to do to be successful,” he said. It’s his hope that this report can be a guide from which businesses can build upon, although he warns that it’s not a playbook.

But what surprised Lightspeed is how unsophisticated the data is on the recruiting side for many companies. At one point, Beseda equated the lack of data as having a sales team with no revenue target, quota, or even sales collateral they could use, but which had to go out and sign up customers. He thinks if there was more organization and data going into HR, which he notes is “one of the core business practices,” it could help make company-changing (or company-breaking) decisions. 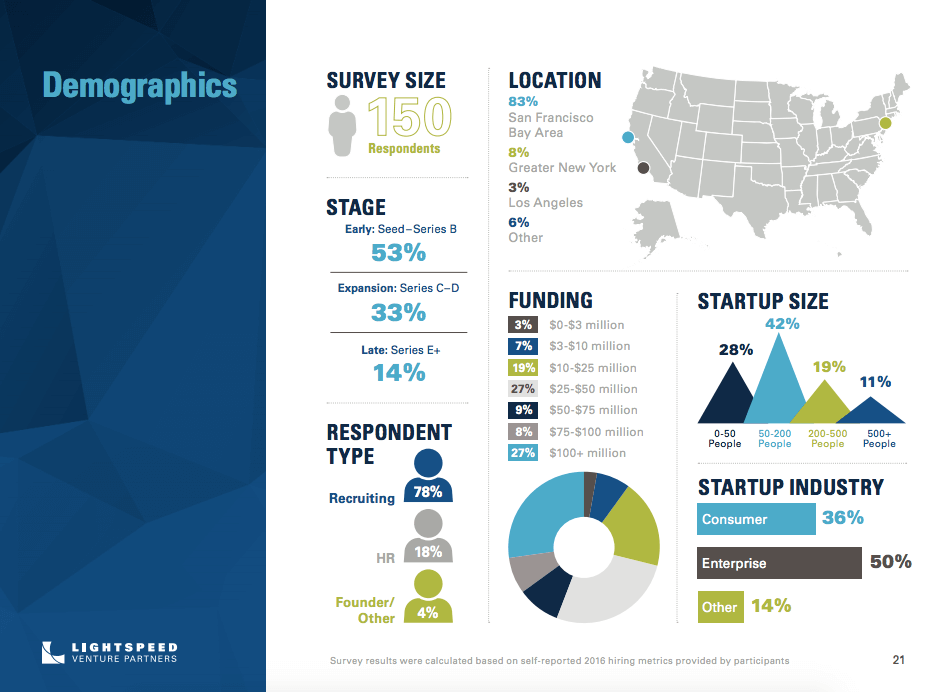 This is the first report Lightspeed has done around recruiting and likely won’t be the last. However, it was limited in scope, as the companies surveyed were heavily focused in the San Francisco Bay Area, Los Angeles, and New York. What’s more, it polled those within the VC’s network instead of using a wide swath of companies.

In order to get an apples-to-apples comparison for companies at various stages, Beseda looked at 2016 as a whole, asking participating businesses what happened last year and grouped them into buckets. In some cases it was difficult for companies to provide information since they didn’t normalize their data to respond to a 50-question survey. In the future, Lightspeed hopes to go deeper into understanding correlations between people programs and the impact on employees. “The first year we were experimenting to see if we could actually gather data from companies,” Beseda admitted. “This is a springboard to think about recruiting more strategically.”