Mobile marketers can boost open rates of their push notifications 85 percent by including emojis, according to a report released today. 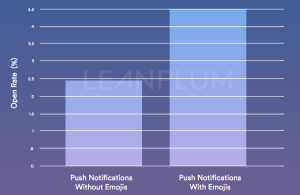 Standard push notifications are only opened 2.44 percent of the time, according to the study by Leanplum and App Annie. Push notifications that contain an emoji are opened at much higher rate: 4.51 percent. That helps mobile app publishers or marketers improve engagement with users and customers, and it’s a big step on the path to monetization.

The study, which reviewed 5,000 push notification campaigns and 2.6 billion individual push messages, found that emoji-using notifications grew 163 percent from 2015 to 2016.

Why do emojis increase engagement?

According to the report, people’s brains react to emojis the same way they react to people’s faces. They’re nonverbal, and therefore processed as an emotional signal, not a logical one. That attracts a different part of our brains, and therefore has a chance to make an impact beyond the pure logic of the message. 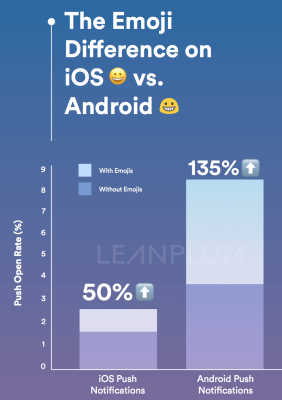 iOS and Android users respond differently to emojis, however — or the platforms differ.

Emojis boost Android push notification opens by 135 percent, while only providing a 50 percent lift for iOS.

Why the difference? Push notifications live longer in Android tray than on iOS, and the report speculates that this means more time to see the notifications and open them.

Similar factors may be at play for in-app messages.

Apps that use emojis in in-app messages could see boost in engagement of as much as 9 percent, the report says, citing an experiment by Canva, a design app. And one app saw a boost in retention as well, with a 28 percent increase in day-two retention.

However, to get orders-of-magnitude better open rates, ensure your push notifications are personalized in response to user behavior.

“Your car is arriving in 2 minutes” is always going to be a stronger motivator of behavior than “Get 10 percent more coins if you buy now,” regardless of how many emojis it contains.