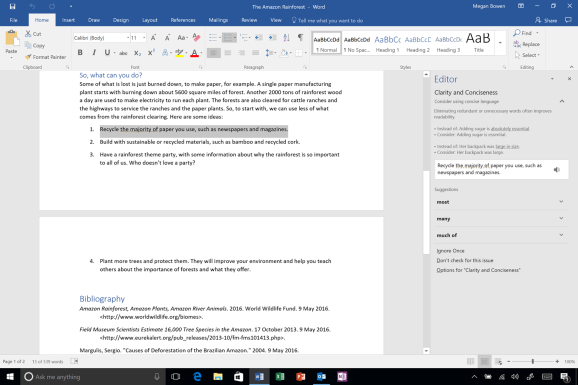 I mean, you really suck. That’s what I wanted to write, but a new feature in the Office 365 version of Word called Editor made an interesting suggestion. The “machine” noted how the word “really” is superfluous, and it’s true. The extra word doesn’t add anything to the sentence, so I removed it.

I’ve been writing professionally since 2001 (around 10,000 published articles now), but I’m still learning, I guess. The new Editor announced today (and available immediately if you select the Fast Insider option within Word under Settings) is like hiring a grammar nanny. The Editor scans all of your prose, alerting you to passive voice and jargon. It can identify words that “express uncertainty” (the suckers, it flagged dozens of instances). For example, in a document that’s 50,000 words (long story on that one, but you should buy it next year), I kept using words like “basically” and “maybe” over and over again. I zapped them because, now that I look back at the text, they add clutter.

How does Word know when to flag words? That’s where the AI comes into play. It’s interesting, because a simple AI would scan for all instances of the word “really” and flag them. Really? If it was that dense, it would have flagged the word in that last question, but it knows enough about language, context, and even one-word questions to know not to flag them.

Another interesting discovery: I’m a champion of active voice. I was educated about the problem long ago. (Oh crap, there it is again.) Word kept reminding me about it, over and over again, until I had some of the passivity beat out of me. Fixing these problems takes time, editing them for better phrasing, but the Editor shows up in a pane to the right when you select the “See More” option when you right-click. It often makes suggestions that save time.

It also works for errors in formal language. I used the word “cushy” in my long document, which is apparently not the best word to describe a chair. (I also said it’s “maybe” or “possibly” not the right word, but Word flagged those for uncertainty.) Word suggested I use the word “comfortable” instead of cushy, and I went along with it. When I scanned for more instances of a casual tone, I found another 20-25 examples. It made me want to go back and take English again in high school. What was I thinking?

Of course, I disagreed with some of the suggestions. I use the word “spiritual” in the document quite frequently, and Word kept telling me to use a word like “atmosphere” instead. Ah, not really. When the Editor kept flagging words for “descriptive adjectives,” I gave in a few times and changed them, unwillingly. (It flagged that word as too common, by the way.) A phrase like “forever ruined” was in passive voice, and it’s also too common, but I like how it reads, so I left that in.

What’s the takeaway from all of this? Machine learning is getting scary good. It can help an old “professional writer” like me find a few alternate word choices and fix problems. It helped me eradicate passive voice. In a few cases, I picked words that were too common or too weak. How it works is a bit of a mystery still — a Microsoft spokesman would not divulge all of the secrets. (By the way, Word flagged that word for gender bias. Sorry, editing team, let’s leave it there as an example.)

The biggest surprise from all of this? I have switched back to Word for now, abandoning Google Docs because it can’t compete with any of these new features. When an application uses AI that’s so helpful and powerful that you decide to use that application over a handful of other options, you know we’re in the middle of a revolution.

Word is helping me write better, which is pretty (I mean thoroughly) astounding.