The VR industry finds itself positioned this year somewhere in what Gartner’s Hype Cycle refers to as the trough of disillusionment. This is a time where, as it gains momentum, the industry needs to rally together and push its ecosystem to the next stage of market adoption.

The established hardware players like HTC, Oculus, Google, and Samsung have the most at stake and the most to lose, but it’s the startup community that’s driving market adoption by creating content that’s strong enough to attract users to adopt the necessary gear.

The fate of both are inextricably tied, and the powers that be know it. Case in point: Facebook committed $250 million last October to specifically fund VR content in addition to a previous $250 million pledged by Oculus. That, alongside the pool of funds that HTC, Colopl, IMAX, and The Venture Reality Fund have put into play, marks content as a particular priority.

The hardware players will need to take a hard look at the library of content that is being churned out by creators and figure out what strategy they need to take in order to minimize cases of underwhelming content, which is the industry’s biggest threat.

First-time users trying out VR content and not feeling compelled to repeat the experience is a big problem. Part of the reason why the ‘replayability’ factor is so low is because VR content creators aren’t investing enough time or using the right tools and resources to properly vet their ideas as they evolve into market-ready products.

That’s where accelerators and incubators come in, the first wave of which includes the likes of Boost VC, Tokyo VR Startups, Seoul VR Startups, UCCVR, and HTC’s ViveX. 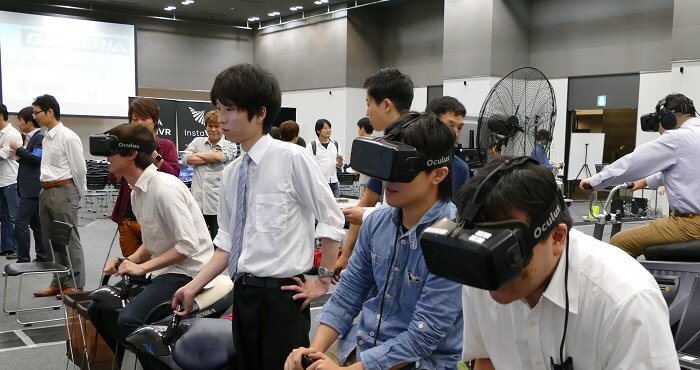 “There’s incredible entrepreneurial interest and dynamism across the globe for VR/AR; thus it’s really the best time to offer a dedicated platform to help them accelerate,” Marco DeMiroz, general partner at The Venture Reality Fund, told me. The VR/AR-specialized VC targets early-stage startups and actively supports accelerators and incubators, including all of the ones just mentioned above, by mentoring their cohorts.

Relative newcomers that are launching VR accelerators and incubators this year include the Realities Centre in London, the VRBASE in Amsterdam and Berlin, and Oarsis in Madrid. I expect more accelerators to spring up around the globe over the next couple of years as I fail to see a better or more attractive model for churning out a large quantity of high quality startups within a short span of time.

“Google, Apple, Samsung, Huawei, Facebook, etc all have huge VR/AR programs and product lines. There is more than ever the need to accelerate innovation and startups which are supporting those products and services,” Thomas Gere, cofounder and CEO at Realities Centre, told me.

1. Reducing uncertainty. We’re talking about a new medium here that upsets many of the old-world rules of how we go about storytelling. How do we direct the gaze of the audience in volumetric space? How do we design user interfaces that take up to six degrees of freedom into account? A variety of completely new problems come into play when building immersive content.

“Starting a company is hard. Starting a company that uses frontier tech that advances at an exponentially increasing pace is multiple times harder,” Carlos López, CEO at Oarsis, told me. Accelerator and incubator programs are designed with uncertainty as the working premise, and the structure of the curriculum is oriented with that in mind at every step. The more uncertain the ground beneath their feet, the more startup founders need to take refuge in following lean and resource-efficient models and methods for ideation and validation in order to hopefully crack the code on what the best product-market fit is for their concepts.

2. Pooling brain power. “It’s extremely useful having these teams working in the same space as we can share our experiences, technical knowledge and give valuable feedback to one another as we develop our products,” Dominic Barnard, Cofounder at VirtualSpeech, explained. His startup just started the Boost VC program two weeks ago to take its public speaking and language learning lineup to the next stage of adoption.

3. Opening access to hardware. Another necessity to VR/AR startups is exposure and access to devices and periphery hardware, which is increasingly expanding in scope, constantly shuffling in specs, and often out of reach for the simple reason of affordability.

4. Community building. Accelerators are also needed at this stage in the industry because, like VR/AR coworking spaces, they are at the heart of the grassroots community and can serve as a sort of neutral ground for the community to build relationships with stakeholders like corporates, venture capital, and the government, all of whom have the same common interest: to get the VR industry off the ground and into the mainstream.

Amir-Esmaeil Bozorgzadeh is the cofounder at Virtuleap, a sandbox for creative developers to showcase their VR concepts. He is also the European Partner at Edoramedia, a games publisher and digital agency with headquarters in Dubai.