Of the global innovation hubs, Shanghai is viewed as the leading hub for technology innovation over the next four years, according to a survey of executives by KPMG.

New York ranked as No. 2, followed by Tokyo, Beijing, London, Washington D.C., Berlin, Chicago, Tel Aviv, and Boston. The survey didn’t focus on Silicon Valley, which likely would have been a clear No. 1. But the conclusion of the survey is that Silicon Valley is going global.

Of the industry’s tech leaders, Elon Musk, CEO of Tesla, came out No. 1 as a global innovation visionary. He was followed by Tim Cook of Apple, and a three-way tie among Jack Ma, Larry Page, and Sundar Pichai. 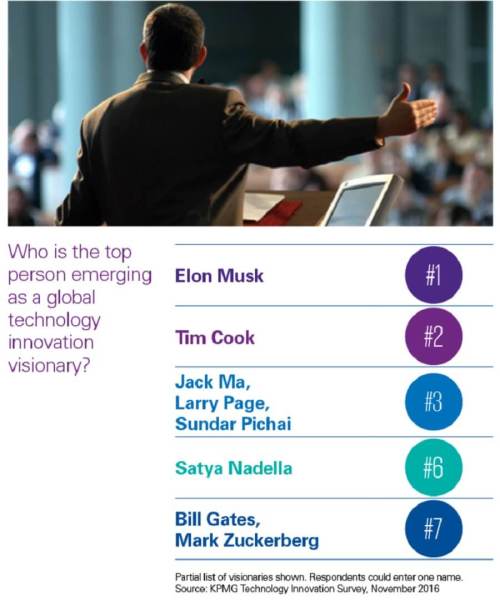 Above: Elon Musk is the most visionary tech leader.

And the survey ranked the top companies driving innovation. The results of that question are below, with Google leading the pack.

Above: The top innovative tech companies in KPMG’s survey.

The factors that matter in terms of innovation by region include the availability of talent, access to tech infrastructure, ability to drive customer adoption, access to alliances and partnerships, access to capital, and training and educational programs. 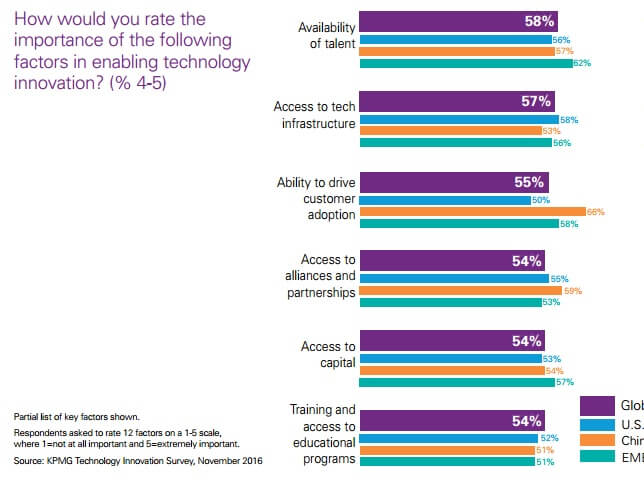 Above: Important factors in enabling tech innovation by region.

The report focused on the rise of 15 innovation hubs with ecosystems of incubators, accelerators, and venture capital, alongside government incentives across the world.

“The spread of tech innovation development is being fueled by growing ecosystems as technology innovation has permeated all industries,” the report said. “Technology continues to enable an unprecedented rise in creativity, across the world, to solve business problems and develop new markets in ways never thought possible.”

The U.S. remains strong. Five of the top six world’s largest companies are U.S. tech companies with over $2.5 trillion in market cap. The U.S. platform companies are leading the tech evolution with big investments in artificial intelligence, the Internet of Things, and other technologies that will have great influence on the way businesses and consumers engage with the world.

“The U.S. tech landscape is morphing into a fourth transformation, as revolutionary new innovation surfaces. Face and voice recognition are going to become part of consumers’ lives in the United States and help to provide stronger privacy protection,” the report said. “Mobile communications, banking, and commerce are all adopting biometrics to make online transactions more secure.”

“While actual investment in startups has decreased slightly in recent quarters, the continued rise in fundraising activity and optimism from tech and investment leaders signal confidence in the United States as a commanding tower to generate ideas, create job opportunities, and advance the economy,” the report said. “Despite a thawing IPO market in the United States, venture-backed tech companies are finding exits through a surge in acquisitions and mergers.”

“As tech innovations unfold, China is stacking up to the United States as a leading force. Global tech industry leaders indicated, in KPMG’s tech innovation survey, the United States and China are the world’s dominant tech epicenters — with the greatest potential to develop disruptive technology breakthroughs that will have a global impact,” the report said. “The strong showing for these two mega-powers is relatively consistent with earlier KPMG surveys, although this year’s poll reflects a slight uptick for China — 25 percent compared with 23 percent the prior year.”