Airbus has proposed a new modular transportation idea mixing air and ground travel that will make you feel that the future cannot get here fast enough.

Unveiled today at the Geneva International Motor show, the system, dubbed “Pop.Up,” would start with a capsule that sits in the frame of an autonomous car. When traffic gets heavy, you just call a drone using your smartphone and lift the capsule up into the air and over the heads of those poor suckers stuck in traffic sucking on exhaust fumes.

The company says a new artificial intelligence platform will help manage the Pop.Up system, letting passengers optimize the mix of modalities for their trip. 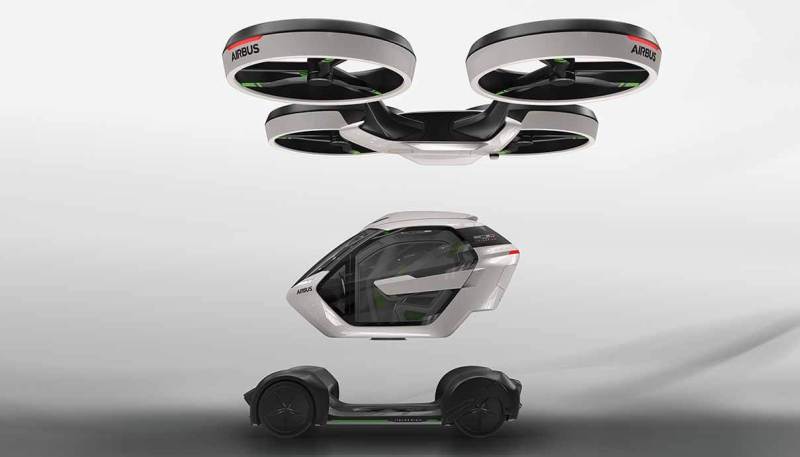 Above: The Pop.Up from Airbus and Italdesign.

“Adding the third dimension to seamless multi-modal transportation networks will without a doubt improve the way we live and how we get from A to B,” said Mathias Thomsen, general manager for Urban Air Mobility at Airbus, in a statement. “Successfully designing and implementing solutions that will work both in the air and on the ground requires a joint reflection on the part of both aerospace and automotive sectors, alongside collaboration with local government bodies for infrastructure and regulatory frameworks.”

Airbus designed the system in partnership with Italdesign, an Italian firm. Airbus executives had said earlier that they were working on some kind of flying car concept that would be unveiled this year. In general, there has been a surge of investment and pilot programs involving flying cars over the past year.

Airbus noted that the capsule was designed to work not just with the flying options, but with other public transport systems, including potentially a Hyperloop system.

According to the press release, the system would work like this:

Passengers plan their journey and book their trip via an easy-to-use app. The system automatically suggests the best transport solution — according to user knowledge, timing, traffic congestion, costs, ridesharing demands — joining either the air or ground module or other means of transportation to the passenger capsule, and following passengers’ preferences and needs.

The capsule is made of a monocoque carbon-fibre cocoon and measures 2.6 meters long, 1.4 meters high, and 1.5 meters wide. The ground module is a carbon-fibre chassis and is battery-powered.

In the air, the capsule would be carried using a 5-meter by 4.4-meter air module propelled by eight counter-rotating rotors. After dropping off passengers, all these vehicles would automatically return to charging stations.

There was no specific timetable given on the project.

“Today, automobiles are part of a much wider eco-system: If you want to design the urban vehicle of the future, the traditional car cannot alone be the solution for megacities, you also have to think about sustainable and intelligent infrastructure, apps, integration, power systems, urban planning, social aspects, and so on,” said Italdesign CEO Jörg Astalosch in a statement. “In the next years ground transportation will move to the next level and from being shared, connected and autonomous it will also go multimodal and moving into the third dimension.”