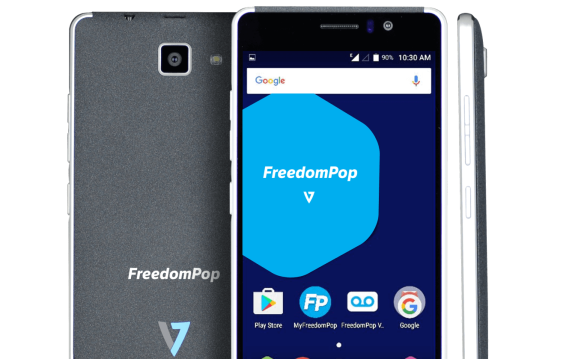 Launching in the U.K. and Spain at first, with the U.S. and other markets to follow, the dual-SIM FreedomPop V7 Android device will cost £59 / €59 ($72), sports a 5-inch IPS screen, 13MP rear-facing camera, 16GB of internal memory, 1GB of RAM, and is powered by the 1.1Ghz quad-core Snapdragon 210 processor. Sure, the phone won’t be winning many awards, but the entry-level device is a notable evolution for a company that has been expanding significantly in recent times.

Founded out of Los Angeles in 2012, FreedomPop has built a business primarily around giving away a limited amount of mobile data, text, and talk time each month in the hopes of upselling to those who need more. The service expanded beyond the U.S. in September 2015 with a U.K. launch, followed by Spain last April and Mexico six months later. The company has raised around $110 million in equity funding, including a $50 million round last January, with some notable backers on board, such as Skype cofounder Niklas Zennstrom’s Atomico.

FreedomPop is no stranger to managing the hardware side of things, as it has been selling refurbished devices for years. And back in November it launched FreedomShop, an online store selling pre-owned Android and iOS devices. But with the FreedomPop V7, the company is going the extra mile by bringing its own handset to market.

“We want the entire FreedomPop experience to be simple, convenient and affordable for consumers, and that includes the device you use with your free plan,” said Nicholas Constantinopoulos, FreedomPop’s international president. “In order to ensure everyone can get access to wireless service, it was important we offer a high-quality, full-featured Android phone at a price anyone can afford. Starting today with the FreedomPop V7, there is no reason anyone should be without wireless service.”

Needless to say, the FreedomPop V7 will ship with one of the company’s free mobile SIM cards with voice, text, and data bundled. For many, WhatsApp will be completely free to use at all times — regardless of how much data remains on a user’s plan. FreedomPop first launched zero-rated WhatsApp access in Spain last year, followed by the U.S. in September.

It’s also worth noting here that FreedomPop won’t be locking the device to its own SIM cards — users will be free to use any network they wish. And, crucially, the device is dual-SIM, meaning someone could use FreedomPop for free WhatsApp on one SIM card but then use a completely different SIM card for calls and texts.