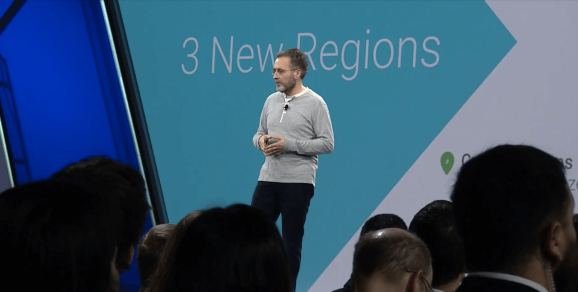 Google's Urs Hölzle at the 2017 Google Cloud Next conference in San Francisco.

At its Google Cloud Next conference in San Francisco today, Google announced that it will open three more regions of data centers around the world by the end of 2018. They’ll be coming to the Netherlands, Canada, and California, said Urs Hölzle, Google’s senior vice president of technical infrastructure.

This comes a year after Google announced that it would open 11 new data center regions. Google’s Asia-Northeast1 region in Tokyo went online in November, and the Oregon region came online in July.

With these, there will be 17 regions and 50 zones available through the Google Cloud Platform public cloud offering, Hölzle said.

Amazon Web Services (AWS), the leader of the public cloud market, also regularly expands its geographical reach. The same goes for Microsoft Azure, which is No. 2 in the market.