Dexter is opening its bot platform today for people to create bots for Slack, Facebook Messenger, and SMS.

You can make your own bot with The Lab, Dexter’s bot creation machine, and the startup team also makes bots for businesses like DigitasLBi, McCann, and other clients.

“If you think about how content evolved over the web, the various flavors of WordPress that are out there certainly contributed to that evolution. And the way that works is there’s an underlying real engineering force, but there’s also an easy-to-use layer that’s consumable for the marketer. That’s kind of what we’re trying to achieve,” Dexter founder Daniel Ilkovich told VentureBeat in a phone interview. 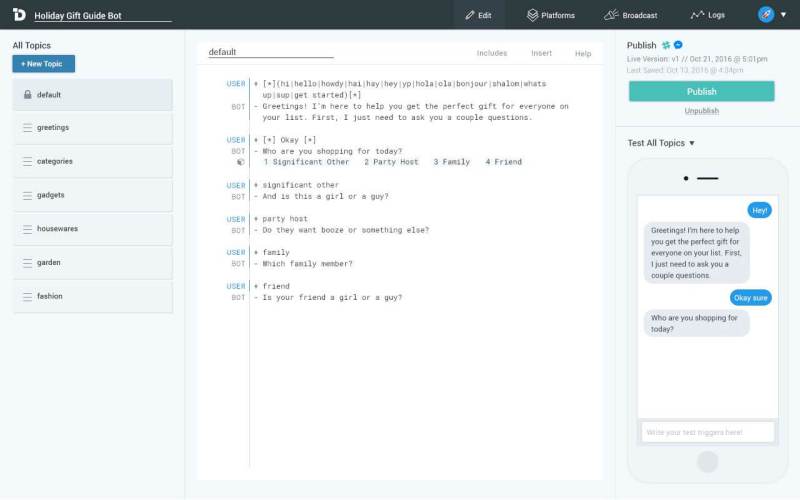 Fewer than 100 bots have been made with the platform first available to the public today, but many of those bots have already grabbed attention, Ilkovich said.

BFF Trump, a bot that shares some of the terrible things that have been said by President Trump, exchanged more than 750,000 messages during election season last year.

Hassan Ali, a copywriter at The Onion’s internal ad agency, has used Dexter to create a Drake impersonator bot and Boy Bye bot, an SMS bot women can use to prank creepy guys.

Like Octane, Chatfuel, and other basic bot creation platforms, Dexter requires no knowledge of java script or other coding languages.

Unlike many other basic bot makers, Dexter relies primarily on text and a simple markup language. A plus sign (+) creates user dialogue and a minus sign (-) creates bot dialogue.

“We take a real writing-first approach, and we said ‘Well html was around for the modern web. We need a language that’s around for describing conversations’. And so we built Dexter with that in mind, using a language that’s kind of similar to an HTML, but [that] really lets you focus on writing the dialogue,” Ilkovich said.

Dexter makes bots with FAQ, quizzes, or character templates, or you can create your own bot from scratch.

Ilkovich said Dexter is good for making something like a flight status checker, where users are unlikely to get lost. Then you can add more functionality, like the ability to buy a plane ticket or speak with customer service representatives.

“We’ll be coming out with a developer software development kit (SDK) to sort of enhance their bots with this code for the people who ought to have developers on their team,” he said. “It’s about getting those key use cases out first but then making sure you don’t hit a wall with the sort of easy-to-use paradigm that we’ve seen around the market.”

Last August, Dexter raised $2.3 million in a round led by Rakuten Ventures, with participation from Social Starts and Betaworks.