These are just three of the most recent social issues that have found their way into the spotlight of our political consciousness. They aren’t new to the scene, as people has been lobbying for either side for decades, but they’re being paid particular attention because of actions taken by the Trump administration.

As the United States finds itself more divided than ever, technology companies are wading into the political waters not with their vocal opinion, but through activism such as filing amicus briefs in court cases, petitioning the government, and more.

Corporate advocacy is nothing new, but tech companies such as Facebook, Google, Apple, and Microsoft are among the biggest businesses in the world, and they have the ability to reach millions, if not billions, of people around the world and shape their thinking. In a time when the White House is likely to face staunch opposition over its policies, some suggest companies define what their values really are.

VentureBeat spoke with Tumblr’s social impact and public policy lead Victoria McCullough and Planned Parenthood’s executive vice president and chief brand officer Dawn Laguens to find out how and why the practice of staying silent no longer satisfies.

“The third rail is changing,” Laguens said. “The third rail used to be companies should not get involved — they’re a blank canvas and should just do their business. Tech companies have changed companies. They have become personalities. They’re an expression of their users.” 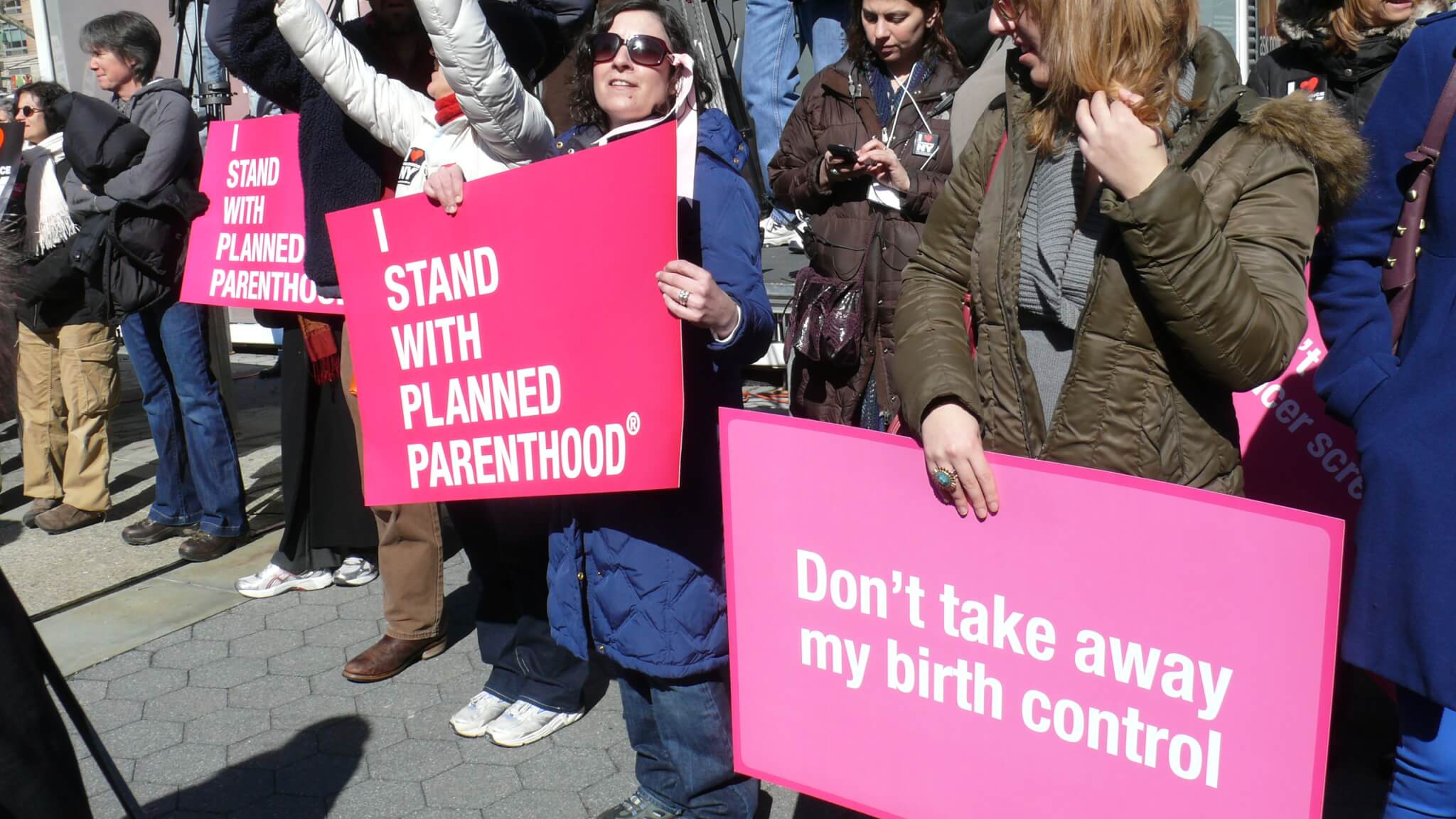 She believes that if companies stay silent on issues, it could have a detrimental impact on usage and the bottom line. “It’s becoming the third-rail for companies with their users that if they remain a blank slate and have no values or point of view on the world, their users will abandon them. It’s a big shift in what we’re seeing in the world. People have higher expectations with companies,” Laguens said.

While there are plenty of examples of tech companies standing up for various issues, such as net neutrality, LGBTQ rights, immigration, and privacy, some in the industry question the wisdom of speaking out. Tumblr spent time thinking about this before settling on a rule of thumb: whether the company could contribute anything to the fight and whether it would have an impact.

“We’re still thinking through a lot of this,” McCullough admitted. “What we’re seeing now and why we feel so compelled to act with swiftness and again be a little more definitive on a certain issues, we do feel like [the president’s Executive Orders] are impacting a group that does not have a voice and does not have the political space to advocate for themselves.” 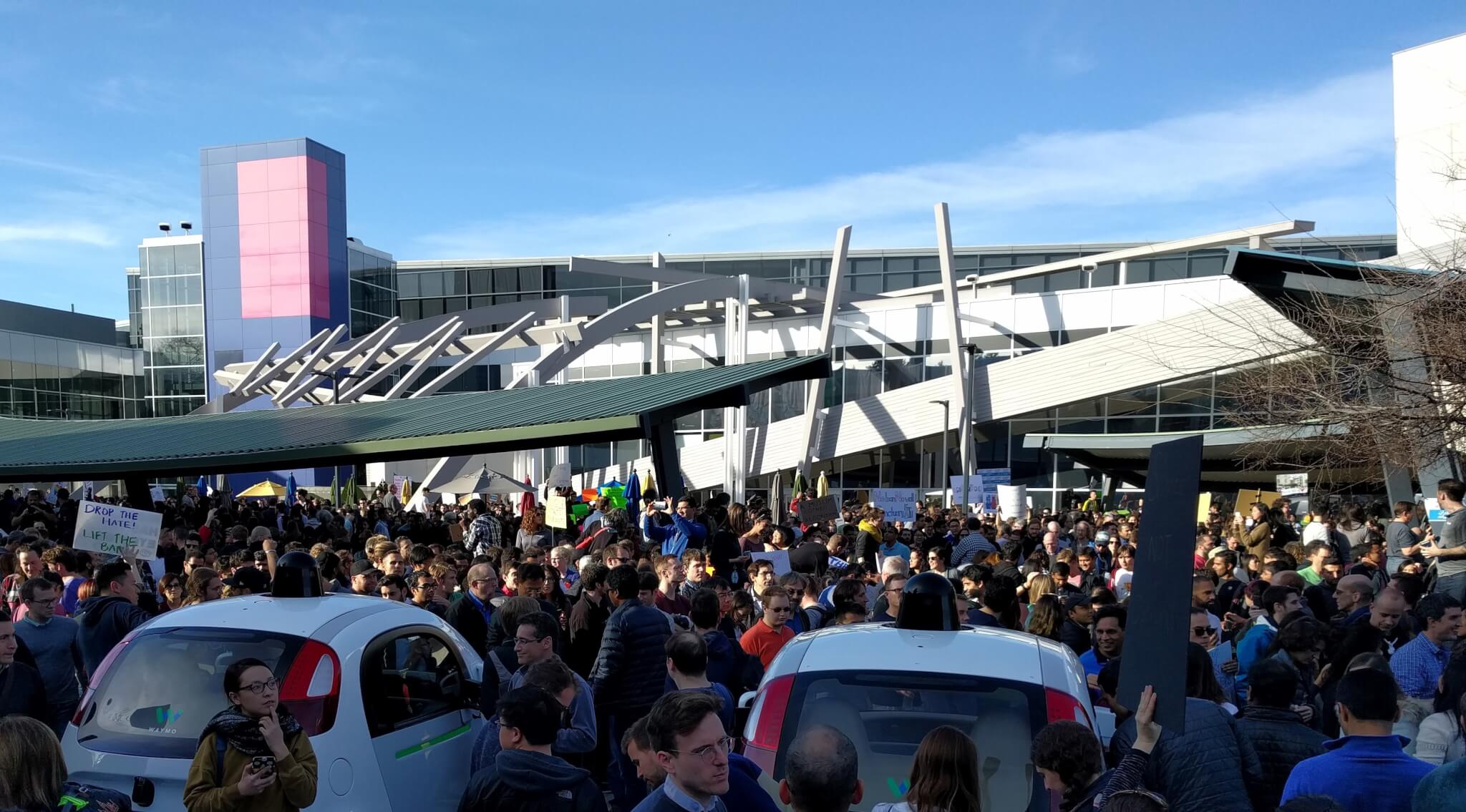 Above: Protests at the headquarters of Google in Mountain View, January 30, 2017. 2,000 Google workers from campuses around the world staged a walkout.

She does believe that some members of the Tumblr community will feel alienated as a result of what the Yahoo-owned company is doing, but she “feels confident that a majority of users that come to Tumblr, stay on Tumblr, and feel it’s a place to connect with one another because we do stand up for our values on the platform.”

As the U.S. government continues its war against the media, both facts and “alternate facts” are being spread around the country. Planned Parenthood is no stranger to that fight — it’s often vilified for providing abortions, including in a now-debunked video “exposé” that surfaced during the 2016 presidential election. Due to all the fake news and hate speech rampant across the internet, Laguens believes the time is now for companies to stand up and be counted. “In the new world order, [companies] can be an open platform to do whatever you want, but [they] have become so prominent in this country as actors in this civic drama and have to step forward,” she said.

Tumblr said it has been an advocate for societal issues “for a while,” raising awareness of things like wage equality, but now it has teamed up with Planned Parenthood to push for reproductive health. It’s not stopping there, though — the company is planning to advocate on four other issues this year, including LGBTQ equality, mental health, racial justice such as Black Lives Matter, and freedom of expression related to media protection and supporting net neutrality.

“We were focused on education last year and kept an eye on issues we could make an impact on. We’re not only about education, but moving users to a place where they can really expand their perspective on issues they didn’t know anything about or had different opinions on and learn from each other,” McCullough said. “We’re moving our users from being educated online to taking offline action — it’s about the long-term game here.” 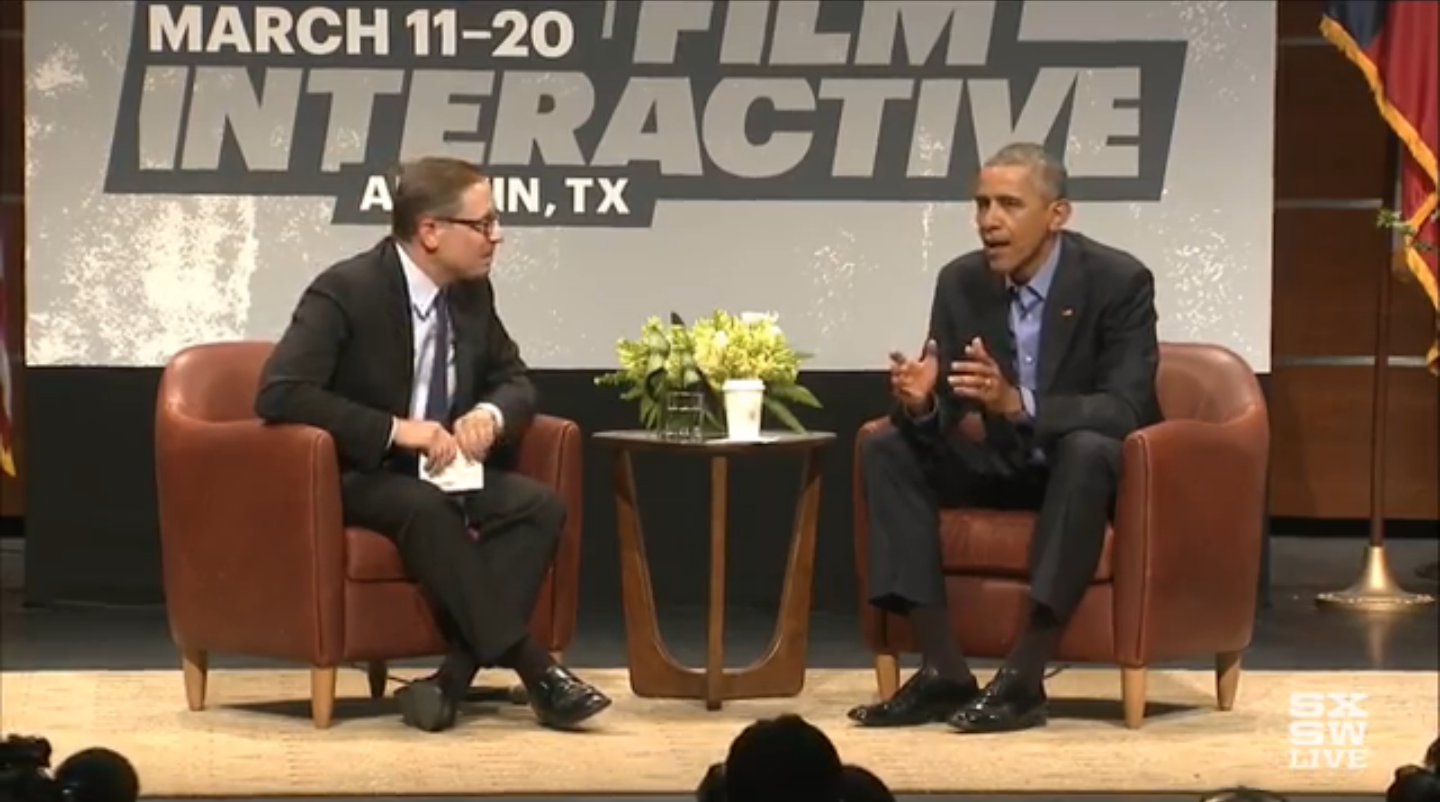 Above: President Barack Obama speaks at the South by Southwest Interactive conference in Austin, Texas on March 11, 2016

This week, Tumblr and Planned Parenthood are in Austin, Texas to participate in the 2017 South by Southwest Interactive conference to speak on community activism. This conversation, led by Tumblr CEO David Karp and Planned Parenthood president Cecile Richards, precedes a party to raise awareness of health care information for women and to protect reproductive rights.

The day after their panel discussion, the groups will put on a “Never Going Back” rally to encourage support of Planned Parenthood’s mission.

“We felt that post-election, we saw from our community that did care about reproductive rights really fearing for the security of Planned Parenthood and saw community engagement around what’s at stake for [the organization]. It makes so much sense that the timing of our party really gave Tumblr an opportunity to step in,” McCullough said.

Tumblr’s relationship with Planned Parenthood is close; not only does the nonprofit organization use the social platform to communicate with followers and supporters, but Karp is also on the Planned Parenthood board of directors. 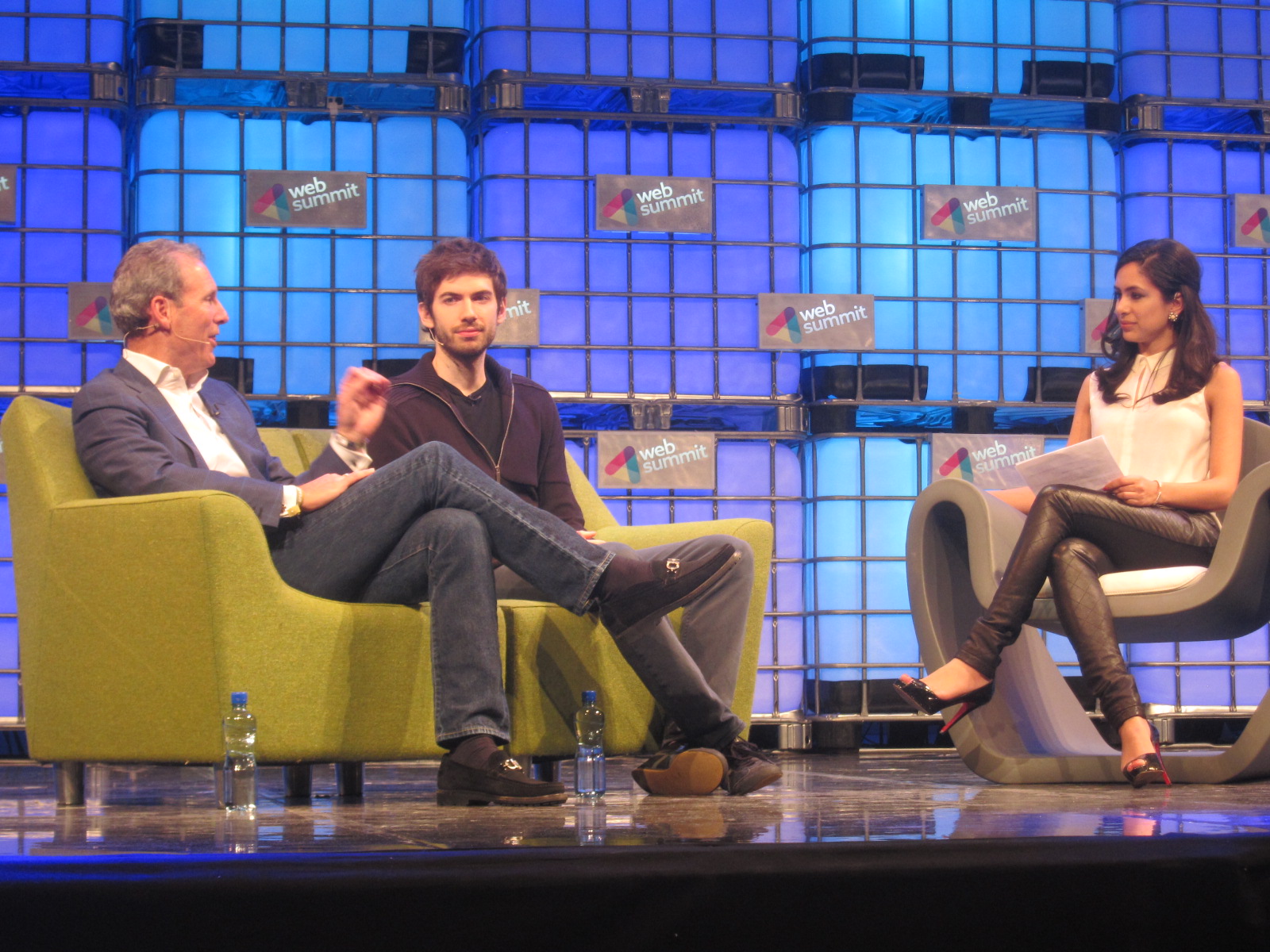 “We got to know the people at Tumblr and were able to really think about how to reach a new generation, particularly around health and reproductive health information and we had started engaging on more of our caregiving, supporter, and activist side — what we’re seeing coming up. It was about how to reach young people and learn and listen to them on Tumblr as Planned Parenthood was building out its own apps and community,” Laguens explained.

Tumblr’s support as a corporate citizen, Laguens believes, could spur similar action from other companies. “I think they are going to unleash a flood of other organizations and corporations that say that this is what the new moment demands of us,” she said.

But regardless of whether companies stand up and be counted, Laguens was staunch in her belief that Planned Parenthood will still be around in the long term. “We plan to be here as long as people need us,” she said. “No matter what hurdles go up, we’re finding new, better, and personalized ways to deliver health care information.”