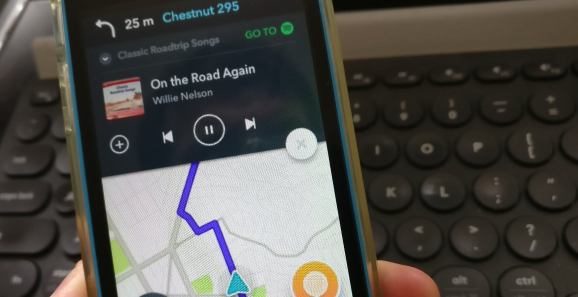 Spotify and Google-owned navigation app Waze have teamed up to integrate their respective services into each other’s offering.

Founded out of Israel in 2007, Waze built a big user base and community around the way it lets users share real-time traffic data, which prompted Google to acquire the company for more than $1 billion back in 2013.

Though Google and Spotify are competitors of sorts, given that both companies offer subscription music-streaming services, Spotify is the clear market leader, and the integration with Waze makes sense for both companies.

Within Waze, Spotify users can access their playlists and change tracks — this saves them having to switch between apps. Once you connect the apps, you’ll see a little Spotify icon — just tap that to control your tunes. The feature is only available in the Android apps for now.

Above: Spotify in Waze

But the integration is a two-way affair. From within the Spotify app, you’ll also see an option to launch Waze while you’re in Spotify’s drive mode screen.

Spotify recently passed 50 million paying subscribers, out of a total user base that’s thought to be close to 200 million. The company has pursued many integrations with other technology platforms in recent years, including one with Uber that lets riders control music on the driver’s stereo. And last year, Tinder hooked up with Spotify to match users based on their taste in music.

The tie-up with Waze isn’t so much designed to garner more sign-ups for Spotify, it’s more a way to encourage existing users to access the service safely while they’re driving — without fiddling around with their phone.