Events have taken a dramatic turn since I published an article last September on how WebVR, the JavaScript API that allows immersive VR experiences to be played straight from your web browser, will make virtual reality massively available.

Back then the only big player that was generating some appreciable degree of buzz was the pioneer itself, Mozilla, with their WebVR open source library, A-Frame. But in the past several months news began to roll out from the likes of Google, Samsung, Microsoft, and Oculus, each giant announcing advances in powering up their browsers with WebVR.

“We are now capable of creating VR content that is available on the most widespread medium in existence by simply sharing a URL,” Diego Gonzalez, Developer Advocate for Samsung Internet told me.

Last month Google announced that Chrome now supports WebVR on Daydream-ready Android devices and that they’re in the process of broadening that access to include desktop operating systems, which will be a huge stepping stone for companies interested in leveraging VR on the web.

Google’s UX Lead for WebVR Josh Carpenter explained the company’s motivation: “Volume of content matters. The ability for anyone to create and publish their vision matters. We view the web as a complement to native virtual reality, helping create new types of content, with wide distribution, and no-friction consumption.”

Other WebVR-friendly browsers include Samsung’s Internet browser, available on its Gear VR headset, Microsoft’s preview version for its Edge browser, and the Firefox Nightly browser. Oculus is building its own native WebVR browser, coined Carmel, which is available in the developer preview — we’ll surely hear more about as we approach the F8 developer conference coming up next month.

“We believe WebVR is one of the crucial ways to drive adoption for VR because it promises to exponentially increase the number of developers building great content,” Oculus’ WebVR product manager Andrew Mo told me. “And the cross-platform nature of WebVR enables users to easily share and connect with their friends outside VR and show them what they are missing.”

Holding true to the nature of the web as a garden without walls or fences, there are a variety of WebVR frameworks that developers can work with aside from A-Frame. Vizor, PlayCanvas, and BabylonJSor are popular along with VR developer engines like PrimroseVR and Zeovr. Oculus’ own open source library, ReactVR, is available as a pre-release.

“The beauty of WebVR is that it works on many platforms now with many more on the way, and tools like A-Frame mean that creative self-expression has been opened up to more people around the globe. Sharing is as fast and simple as sharing a web page, and it’s open to anybody,” Mozilla SVP of Emerging Technologies Sean White told me via email. “Now that others have joined in, we hope they will develop their tools and applications in such a way that will ensure they remain relatively easy to standardize and can be supported on multiple browsers and VR headsets.”

WebVR has the inherent potential to grow like wildfire because it is frictionless by design. No downloads. No installs. No locks or keys. No queuing in front of some arbitrary bouncer.

It’s the fastest way to build and share VR content, sidestepping the walled gardens that have popped up, feebly trying to segregate audiences before they even appear and hoping to copy and paste the old app store business model onto an emerging ecosystem.

WebVR is also the easiest way to learn VR, thanks to its open source DNA, which makes it both more available and better able to drawing in and onboard a wide pool of talent.

“Now you see something on this web page and you wonder how it is done, what can you do about it? Display the source. You can now study how a nice visual effect was done, copy-paste it, modify it, break it, fix it, adapt it to your own need,” Fabien Benetou, a WebVR developer well known in the A-Frame community, told me. “Thanks to this, WebVR is the most efficient way to learn VR.”

Only HTC appears to be slow, or too stubborn, to join the party, and I have a working hypothesis. WebVR isn’t sexy. At least not yet. In fact, at this stage in its development, it often looks like VR from the ’80s and ’90s, particularly because the developer community isn’t prioritizing consumer-facing applications quite yet.

WebVR isn’t going to immediately offer the kind of high-fidelity experiences that the industry has been hyping up as a lure to ignite consumer adoption. And it’s not yet capable of servicing the high-octane gaming and entertainment experiences that are being touted as the primary appeal of VR to the mainstream.

WebVR does, however, promise a broad, versatile, and far reaching impact on various industries already firmly rooted in the web. Think about any web-based industry and you can easily imagine a WebVR extension to enhance the value-add and bottom line.

Think media: You could be reading a news article about an event taking place in a city on the other side of the world and immediately be able to load up the specific environment and circumstance in VR, without ever leaving your browsing experience. Or e-commerce: You could jump into a brief guided tour of that same city while considering the ticket costs of booking a flight. How about consumer goods?

You can get a good feel for WebVR’s sober approach by looking at the fruits of the WebVR Hackathon run by Aquinas Training in NYC back in December. One of its champions, Roland Dubois, won the best app category with “gravr — A Globally Recognized Avatar for VR on the web”, a VR profile API that follows a user from VR experience to VR experience, customized to them and based on their hardware and real-life environment. 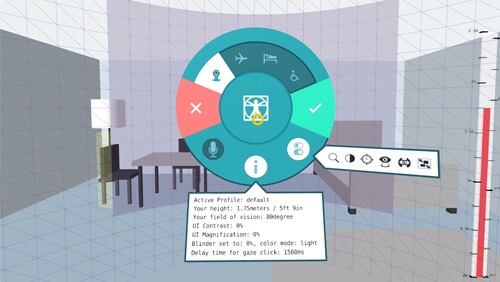 Above: Roland Dubois’ gravr concept, “A Globally Recognized Avatar for VR on the Web”

Dubois’ work highlights one particularly awesome aspect of WebVR: It provides the building blocks for what developers are calling the Metaverse, an interconnected virtual world where users can travel from one immersive experience to the next, like walking through an infinite series of doors that take you through an endlessly growing virtual universe.

Here’s how Thomas Balouet, cofounder of WebVR-based startup LucidWeb, explains it: “You know that feeling you have when you just want to check a cooking recipe on the Internet, and two hours later you’re reading an article about Patagonia on Wikipedia? Well, imagine you put on your headset to watch a cool relaxing experience, and 15 minutes later you find yourself talking with friends on top of a mountain or flying over your home town. That’s what the Metaverse would be, and this kind of situation would be possible only with deep-linking, one place bringing you to another one related to it, without you having to come back to a common place, or even realizing you’re leaving the first place. Only WebVR can enable that.”

Being in the VR industry, I hear a lot about the search for the killer VR app — an app that will finally get mainstream users flocking to VR. Well, maybe we’re looking in the wrong place for that trigger. Maybe it’s not an app that we should be looking for but a platform that offers a paradigm shift, fuelled by the web. An interconnected array of virtual reality experiences, tools, and products could blow our collective minds.

Amir-Esmaeil Bozorgzadeh is the cofounder at Virtuleap, a sandbox for creative developers to showcase their VR concepts. He is also the European Partner at Edoramedia, a games publisher and digital agency with headquarters in Dubai.