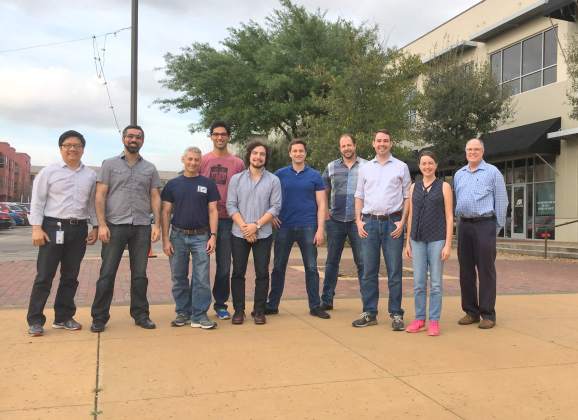 The Mythic team outside their Austin, Texas office.

While there’s no shortage of hype surrounding artificial intelligence, there’s also no shortage of companies seeking to harness its potential. Mythic is one of them, and it claims to be taking a different approach. The Austin, Texas-based startup wants to move away from the cloud and a dependence on network connections by putting AI-on-a-chip inside smart devices, like security cameras and health wearables. DFJ believes in the potential of this approach to AI and led an $8.8 million round into Mythic that was announced today.

The startup has developed both software and microchips to make its AI smarter and faster. Today, artificial neural networks need big server racks powered by graphics processing units (GPUs) to handle complex algorithms. Mythic wants to bypass this by boiling down the processes onto a single microchip. Other startups, like Intel-acquired Movidius, have already taken a stab at this. But Mythic’s founder and CEO, Mike Henry, claims to be taking a unique approach.

“If you look at any microchip out there running AI, you typically have memory and processors,” he told VentureBeat in an interview. “We found a way to eliminate the processors and do all the computation inside the memory.”

By leaving the binary world of microchips, Mythic is solving the latency component that other cloud solutions are facing. Take Amazon’s Alexa and Apple’s Siri for example. Both run on the cloud, so there is a time lapse in their response. “Our dream is to take a Siri or an Alexa and be able to have a conversation where they’re instantly responsive,” said Henry.

Mythic has tapped some early adopters (which it would not disclose) to field test the technology. The startup is looking to bring its chips to smart-home devices, cameras, health wearables, security cameras, and drones. Henry sees many other applications down the line, including robotics, autonomous vehicles, and virtual reality. The startup plans volume shipments of its microchips in mid-2018.

Its chip sizes vary depending on the industry and can go from a shirt-sized button for health wearables to the equivalent of a pack of cards for drone cameras. Prices depend on the application.

Founded in 2012, Mythic came out of stealth mode today. The startup, formerly known as Isocline, changed its name for several reasons, Henry said, the most notable of which is easier spelling and pronunciation. The new name also carries dramatic effect. “When competition hears about what we do, it’s going to appear like it’s impossible,” said Henry. “One step above epic.”

When asked whether AI-powered devices could evolve into Westworld-type bots that develop a conscience, Henry was skeptical. “We’re not quite in a Westworld environment yet, and I’m not going to claim that I’m Anthony Hopkins!” he told us. Just like humans faced billions of years of evolution, AI will also need time to evolve. According to the CEO, AI is currently at a pattern-matching style intelligence rather than human-like intelligence.

Steve Jurvetson, a partner at DFJ who has led investments in several machine learning companies, such as Intel-acquired Nervana and Tesla, also sees AI evolving. “When you start to see these hints that we re-create evolutionary biology in a computer, you get the same basic building blocks, the same developmental milestones,” he told VentureBeat in an interview. “It’s kind of spooky!”

When discussing Mythic, Jurvetson compared the startup to Minecraft and its complex constructions. “They’ve figured out a way to do the maths that underlines all machine intelligence in a standard flash memory chip,” he said.

DFJ was joined by Lux Capital, Data Collective, and AME Cloud Ventures in this round, which initially closed at $5.8 million. But after receiving several unsolicited investments, Mythic accepted notes worth an additional $3 million, which will convert into a Series B round in the future.

Mythic plans on having a team of 20 by this summer across its headquarters and its office in Redwood City, California.