Samsung has announced a new version of its Gear S3 Classic smartwatch, endowing the Tizen-powered timepiece with 4G LTE connectivity. The addition of LTE gives Classic the same cellular broadband capabilities as its sibling, the Gear S3 Frontier.

The announcement comes just days before Samsung’s biggest launch of the year, its Unpacked event introducing the Galaxy S8 and S8 Plus.

Besides the addition of the new radio, however, not much has changed about this wearable — targeted at consumers seeking a more traditional-looking device. It bears repeating that both Gear S3 models run Samsung’s proprietary Tizen operating system, and not the Android Wear platform found on most smartwatches not made by Apple. 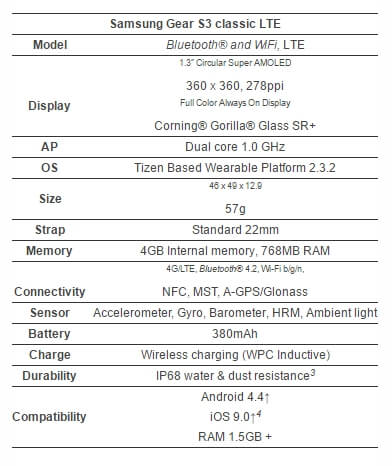 That doesn’t make for less compatibility, though: It’s compliant with both Android and iOS devices.

Samsung was not specific about release or pricing details; that information will come directly from the U.S. carriers who will be stocking the upgraded S3 Classic, the company said in a press release.