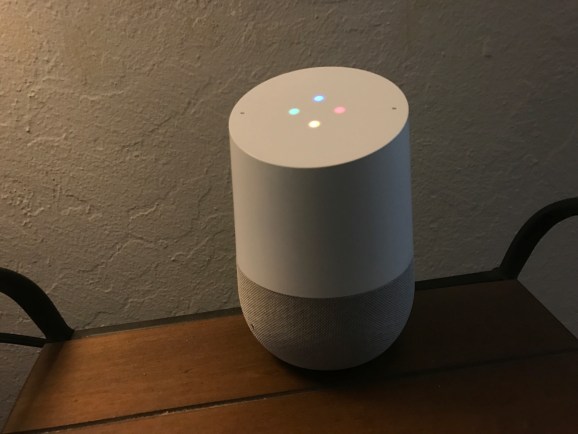 Roughly 15 new services have been added to Google Assistant this week, including actions for IMDB movie ratings and others that tell you when the food in your fridge will expire and play you Jaden Smith quotes.

Actions are like voice-only apps for Google Assistant, akin to skills for Alexa and Cortana.

Among the most noteworthy new actions is Chefling. You can already ask Google Assistant to add grocery items to a Google Keep shopping list, but Chefling does a few specific things for grocery shopping and keeping track of what’s in your kitchen.

By sharing your grocery list with Chefling, the Google Home action or app can tell you when food in your fridge is likely to expire or suggest recipes based on ingredients in your kitchen.

With the app, ingredients for recipes you import or can be added to your shopping list. An iOS integration allows your shopping list to roll up into app widgets. Recipes can be imported into the app or taken from the community. As an Alexa skill, Chefling has been referred to as one of the best skills to add to an Echo.

Other actions for foodies include Wine Guide, Beer Guide, and Food Network.

The Jaden Smith quotes action was made by Matthew Gillen, a 16-year-old who finds Smith’s words motivational.

The son of actor Will Smith, 18-year-old singer and actor Jaden Smith has had a reputation for saying spacey, reflective things for years. This action says things like “If a bookstore never runs out of a certain book, does that mean that nobody reads it or everybody reads it?” and “We need to stop teaching the youth about the past and encourage them to change the future.”

Gillen is also maker of Computer Builder, an action that walks through some of the basics of making a computer.

The Bugle Notes action is for people who want to attend the U.S. Military Academy, aka West Point. First-year cadets are expected to learn a special set of knowledge that includes The Soldier’s Creed or the number of lightbulbs in Cullum Hall. Bugle Notes shares bits of this knowledge.

Following an announcement last week by iRobot that its Roomba will get an Alexa skill, robot vacuum maker Neato launched its action to start, stop, or pause cleaning.

Since the launch of the Actions on Google platform late last year, nearly 140 actions have been made by third-party developers, tinkerers, and businesses.

Other noteworthy actions made available since launch are as far-ranging as WebMD for learning about illnesses and checking your symptoms and a dog doctor, slang dictionary, and city services.

A list of available third-party Google Assistant actions can be found in the Google Home app. To find them, go More Settings and choose Services.