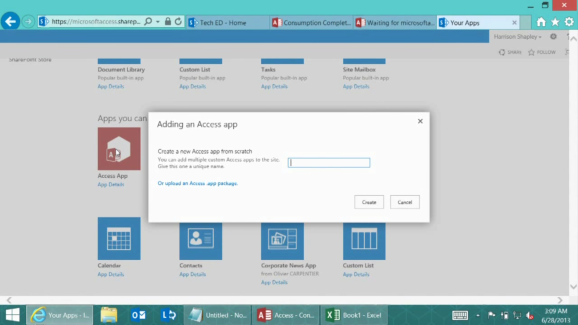 Microsoft announced earlier this week that it will discontinue Access Services for SharePoint Online in 2018. Leading up to that, people will no longer be able to launch new Access apps in SharePoint Online, beginning in June.

“We no longer recommend Access Services for new apps. This feature will be retired from Office 365,” the Access and SharePoint teams wrote in a March 27 blog post. Microsoft is now encouraging people to start using its codeless app building tool PowerApps instead.

One reason for the decision: Access Services don’t work on mobile devices.

Access has existed for nearly 25 years, providing a graphical user interface for surfacing and editing data in relational databases. Microsoft introduced Access Services in 2013 to let companies build custom web-based apps and store data in SharePoint, including in SharePoint Online. As such, Access Web Apps live at dedicated URLs.

The move to kill Access Services for SharePoint Online doesn’t affect support for these web-based apps in SharePoint Server. Indeed, on-premises support for Access Web Apps (AWA) will be available through 2026, Microsoft senior product manager Chris McNulty wrote in a comment on the announcement. Access Desktop databases won’t be affected either.

The move has generated some negative feedback, with some people saying Microsoft isn’t providing enough time for people to adapt to the change and others saying PowerApps alone can’t do what Access Services on SharePoint Online can.

“Appreciate all the comments here which we’re reviewing internally,” McNulty wrote. “We recognize that removing a feature from our service can be disruptive.”