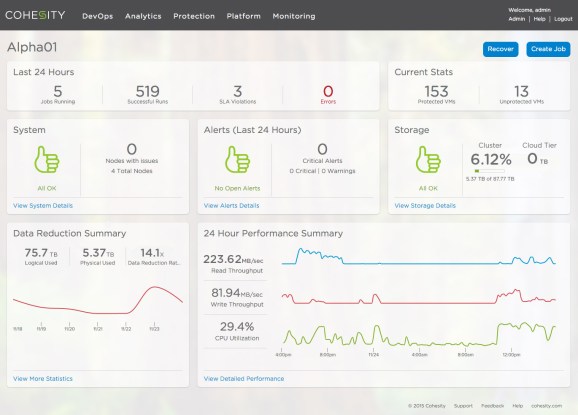 Data centers typically have two layers of storage — primary, for mission-critical data, and secondary, for backup copies and analytics. Cohesity, a startup that specializes in the latter, today announced a $90 million funding round led by GV (formerly Google Ventures) and Sequoia Capital.

“Secondary storage typically accounts for 80 percent of the storage capacity within an enterprise,” Cohesity founder and CEO Mohit Aron wrote in an email to VentureBeat. “Yet innovation in the secondary storage space has lagged behind.” Aron is well-versed in data storage and cloud infrastructure, as he cofounded Nutanix, which went public a few months ago.

Cohesity offers replication, archiving, and cold storage in public clouds like Amazon Web Services (AWS), as well as on-premises software and hardware. A Cisco Unified Computing System (UCS) box with Cohesity software is also available. The most popular option is the integrated on-premises hardware and software product, which starts at $90,000.

“The simplest way to think about it is like a smartphone,” he wrote. “We used to carry around a mobile phone, an MP3 player, a GPS device, a camera, and even a flashlight. Smartphones combined all of those devices and more into one. In enterprise data centers, the principles of hyperconvergence mean that companies can now merge compute, storage, and networking into a single box.”

In terms of other players in the market, Aron views incumbent legacy providers with backup solutions — like EMC and Veritas — as competitors. “There is certainly a new crop of backup vendors in the startup world, as well, but they are also selling siloed point solutions that don’t solve the fundamental problems that our enterprise customers are facing today,” he wrote.

The new capital will be used to expand sales and marketing globally and to accelerate research and development (R&D) for secondary storage.

Based in Santa Clara, California, Cohesity has 150 employees.