Group video chat Fam is thinking about adding several interactive experiences to its iOS and iMessage apps, including TV shows, news video, and other content to play and watch with friends. Fam users can chat with more than a dozen people at once.

Just four months old, Boston-based Smack, the company behind Fam, will begin by adding more games in the coming months and then expand further by working with production partners and game developers.

“We believe that putting an interactive framework on top group video is going to be the way to go,” CEO Giuseppe Stuto told VentureBeat in a phone interview. “Whether that is solely focusing on games or [includes] other forms of entertainment, more along the lines of consumed media, is something we’re experimenting with. Basically, taking what happens in real life and placing it on top of Fam — our group video, to be specific — is how we think this becomes a daily habit, relative to the other companies in this space.”

Early iMessage success vaulted the five-employee startup into competition with group video chat apps like Houseparty, Google Duo, and Tribe. At the time of writing, Fam was #38 in the free apps part of the Social Networking category of the App Store.

Fam has millions of monthly active users, Stuto said, but he declined to state specific numbers.

“Anything we fill on top of video is to make the experience more immersive and interactive,” he said. “Games, watching films and TV shows together, eventually even third-party developers can bring their fun tools and games to Fam.”

Interactive experiences currently available on Fam include Draw with Fam, which is basically a rendition of Pictionary, and Trivia with Fam, a trivia game. 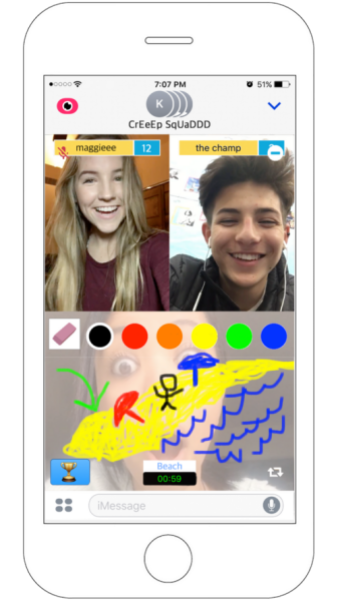 Two weeks after the launch of iOS 10 and the iMessage app, Fam launched an accompanying iOS app in order to address a prominent issue for iMessage apps: If you leave iMessage at any time, the call ends.

That didn’t work for the Fam user base, cofounder Kevin Flynn told VentureBeat. The average Fam user is between the ages of 13 and 21, with the average Fam session lasting between 15 and 30 minutes.

In the past year, chat platforms from WhatsApp to Slack to Kik have added group video chat experiences to their apps. There’s no telling what changes will happen with later versions of the iOS iPhone operating system, but Fam said the creation of interactive services will be critical.

“We’re discovering more and more that the most valuable experiences are the ones that allow you to do more social interaction — games, consuming other content, like TV shows and movies. So we think that focus and the social experience in your networks is going to be kind of our anchor point,” Flynn said.

The iMessage App Store and iOS 10 were first made available last September. Last month, Smack announced that it had raised $1.8 million to grow the audience of its iMessage and iOS apps.