Onward is on a mission to help people conquer their addictions and achieve tech-life balance.

The company’s founders, Adam Singer and Gabe Zichermann, both have friends and family members with a history of addiction, and they believe that technology can play a role in causing and curing today’s overuse crisis. Their chatbot app aims to help people overcome overuse and change their behavior.

In some ways, this new Los Angeles startup is penance for Zichermann, who acknowledged in an interview with VentureBeat that he spent the better part of the last decade trying to make experiences more addictive through his work in “gamification” and behavioral design. Now he’s using artificial intelligence to help defeat addiction.

He used his knowledge about making addictive apps to design Onward and start advocating for balance and transparency in our relationship with technology. The company raised $2 million from Founders Fund in 2016, and counts as advisers several clinicians from the University of California at Los Angeles Health and Columbia University Medical Center. 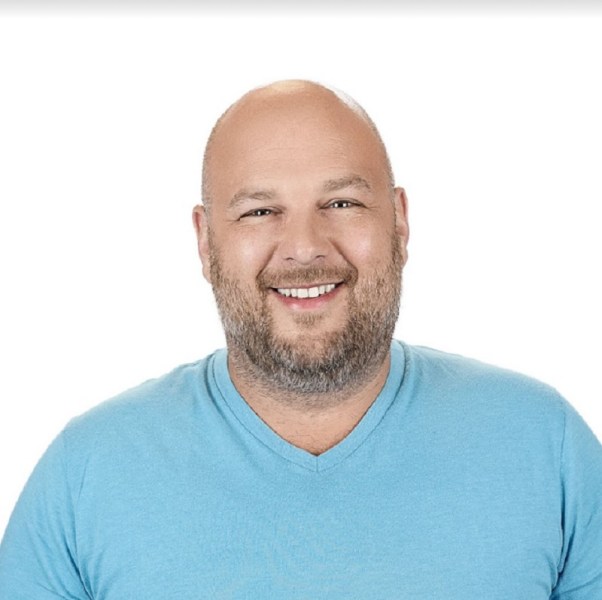 Above: Gabe Zichermann, cofounder of Onward.

The Onward experience starts as you download the app. It offers you tips about addictions — which Zichermann prefers to call “overuse” — and the behavior that triggers an addiction experience or relapse. It also trains you to be aware of those triggers and figure out ways to avoid them or confront them.

“If you are bored or lonely, Onward is designed to get you off your device and doing something in the real world,” Zichermann said. “It’s an app to get you to use your smartphone less.”

The app asks you to check in with your AI coach on a daily basis to maintain accountability. When you first log in, the app asks you how you feel. You answer by selecting an emoji, and then the first few days are spent onboarding.

“They all have a technology piece and the smartphone in common,” Zichermann said. “The technology makes it more addictive. What we see in our data is that this is a problem for society.”

In contrast to treatments such as Weight Watchers, where you interact closely with other people in your group, Onward is a solo experience, driven by artificial intelligence and analytics. With your permission, Onward monitors your usage of your smartphone, laptop, and home computer. It then compiles stats on the apps and websites that you use so that you can understand your own behavior.

Onward also helps you figure out what constitutes an addiction. Zichermann said he had a real problem playing Civilization when he was in college. He played so much that he once found himself at a party, surrounded by other people who were having fun, and he was off by himself playing Civilization, which used the phrase “one more turn” to advertise its addictive qualities.

“It would have been great to have a nudge,” he said. “Like, ‘Hey Gabe, do you really need to be doing this now?'” 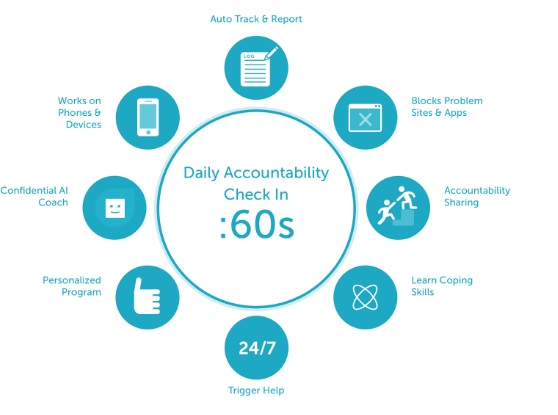 Above: Onward asks you to check in every day.

He noted that addiction solutions like rehab work well when users are in the facility, but they tend to fail when people leave. Onward is an attempt to create a rehab adviser who is with you 24 hours a day. It offers interventions, removal of triggers, and treatment that is personalized for you.

By using a mobile device, Onward hopes to take the medium of your addictions — a mobile phone that is always with you — and use it to combat those same addictions, even screen addiction.

“It’s the only way we are going to address it,” Zichermann said. “A non-tech solution to this problem is not the right way to go. Your software has to be in the device to help people. People know what they should do but lack the help to get there.”

Onward communicates with you via text message. It holds a conversation with you that is scripted, where you have to tap on the screen to get to the next part of the conversation. Over time, the AI will become less structured and better able to talk in a human way, as the core tech advances.

The app also compiles reports for you to look at on a regular basis, so that you return to the app and get more advice and reinforcement. It shows you the percentage of your time spent on certain addictive apps, and how much time you spent with them. About 89 percent of users have installed reporting.

Due to the iPhone’s security restrictions, the company had to build a new technical solution leveraging virtual private network (VPN) technology. That keeps your data private.

“It’s super important for us that it is nonjudgemental and private,” Zichermann said. “That was a big priority. It’s important to be private because the stigma around this is huge.”

Meanwhile, the app tries to predict when someone is going to act on a trigger, so that it can bring interventions to them in the moment. Zichermann said that is the benefit of the app running on a device that you have with you all of the time. If you feel you are giving in to a trigger, you can ask the app for help. By day three, you can set up a Smart Filter, which blocks the sites that trigger your addictions. The app will let you access that site once a day at a particular time.

There are many different kinds of clinically validated interventions that psychologists use, including mindfulness, physical activity, social connectedness, education, motivational interviewing, and others. Different interventions are better suited to different people at different times. Rather than focusing on a single kind of intervention, Onward treats them as modules (or “skills”) that are delivered by a learning algorithm that attempts to surface the optimal solution. The service is designed to support any kind of skills, and in the future the company hopes to open up the platform to allow other developers to add their modules.

Most solutions in behavioral health rely on self-reported usage or affect data and use highly filtered populations that skew their results. Onward’s mission is to demystify behavioral change and bring transparency to addiction treatment. Its results are based on empirical data that is observed, not self-reported (whenever possible), and it is algorithmically adjusted to maximize user benefit. 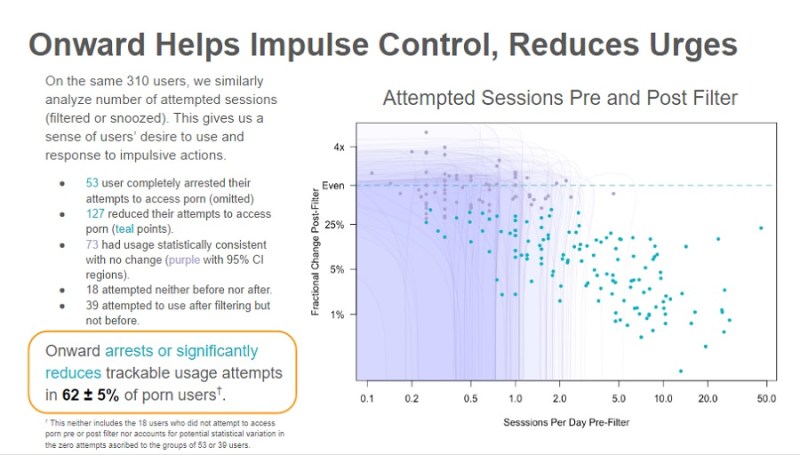 Over time, Onward will start charging a subscription fee. In the beta period, the company will not charge anyone. Once the fees do kick in, the subscriptions will be between $15 and $29 a month, which Zichermann said is a lot less than going to see a therapist on a regular basis. He hopes that health insurance companies will underwrite the costs in the future.

“Interventions are tens of thousands of dollars per patient, and we are talking about tens of dollars,” Zichermann said.

In terms of what the company’s focus for the future will be, he said that science will drive the company forward. The data will come in the form of input from advisers and the anonymized analytics results on the app’s usage.

Ultimately, Zichermann thinks Onward will be good for social networks and other addictive sites as well.

Above: Onward gives you metrics on your addictions.

“It is important that developers of apps make them as good as they can,” Zichermann said. “But somebody has to be the advocate for the user. A good customer isn’t someone pushed to the point of breaking.”

The company has nine employees.

“It’s a personal mission for all of us,” Zichermann said. “Our hope is it becomes a standard. Everyone I talk to has been touched by addiction in some way. There’s a lot of positive change to be done here.”