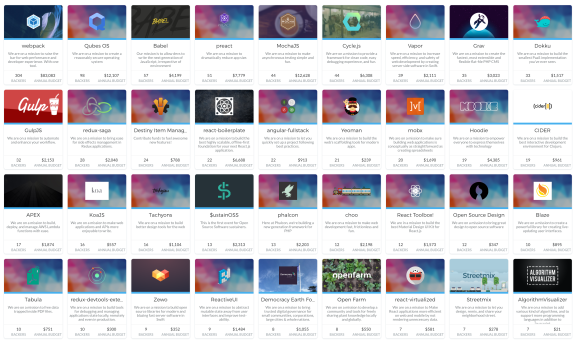 Some of the open source projects that can be backed on Open Collective.

Open source technology permeates throughout our society, playing an important role in much of the technological advancements in the world, such as the WordPress blogging platform. Developers recognize the value of these projects, but there is some grumbling about how there should be ways for project contributors to be remunerated for their contributions.

Currently, developers have the option to solicit funds to support their efforts using PayPal or some other payment mechanism, but supporters may be skeptical about their donations going towards the open source project instead of lining the pockets of a single individual. Additionally, some contributors may be wary about being the person tasked with collecting these funds. This is something that Open Collective wants to solve. It is already using its service to help developers quickly set up virtual legal entities on-demand to collect contributions in a transparent manner.

Created by Storify cofounder Xavier Damman, Democracy Earth’s Pia Mancini, and former Dropbox product manager Aseem Sood, Open Collective is a blend of Amazon Web Services, Stripe, and GoFundMe in that it lets open source developers get 501(c)(x) entities up and running without having to deal with unnecessary paperwork. Once done, projects can immediately begin collecting donations from supporters on a recurring basis.

“The reason for this is because 501(c)(x) sucks,” Damman told VentureBeat. “It’s terrible — you need to deal with a lot of paperwork, file taxes, do accounting, etc. It’s a pain in the ass, something our generation doesn’t want to do. We don’t mind paying taxes — we just don’t want to do taxes.”

He continued: “What if we had to recreate the 501(c)(x) in 2017, what would it look like? Could it be as easy as creating a Meetup or Facebook group and also transparent, like on GitHub, so everyone can see what you do and learn from you without ever bothering you?”

At least 186 projects are currently listed on Open Collective, continuously raising funds to support developer efforts. The platform doesn’t host code or offer any supplemental features. Damman explained that he doesn’t want to replace existing players, but speed up development and adoption of open source tools. He cites a time when building Storify where he used open source technology and wanted to give back, but wasn’t able to because there was no mechanism by which to do so.

The potential for Open Collective is to give developers the ability to focus on their projects full-time. Right now, more than $200,000 in yearly budgets has been raised through the service, giving some open source project developers enough runway for the next 12 months to work on their code. Damman cited the Webpack project as an example; it has raised over $80,000 for its annual budget, enough that Tobias Koppers, one of its core contributors, was able to become a freelancer so that he could dedicate more time to developing the code. Essentially he was hired by the community to work on Webpack, a technology to improve web performance.

Donations are not necessarily on an ad hoc basis like with GoFundMe or Kickstarter. Damman described it more like Patreon with recurring subscriptions, but as of right now, there are no rewards or incentives based on how much is contributed. However, some projects are creating their own programs that provide office hours to those that meet a contribution threshold.

Once money has been donated or collected, Open Collective transfers it to a designated financial institution associated with the project. When a contributor wishes to use those funds, the transaction isn’t hidden but rather is completely public. The expense will appear on the Open Collective project page for everyone to see. The recipient of the funds will be provided the assigned amount through their PayPal account.

While heavily focused on open source projects, Open Collective also supports other groups that are in need of transparent ways to collect funds, such as Meetup groups, parent-teacher associations, student clubs, movements, associations, and more.

Damman said that Open Collective takes a 10 percent commission from all monies raised and that amount is split equally with its fiscal sponsor, the legal institution that owns the bank account where the money resides on behalf of the project. There are additional fees, such as processing credit cards, which go directly to Stripe. Open Collective is looking at other means of payment, such as ACH and Bitcoin.

More than $800,000 has been raised by Open Collective to fund its mission, bringing in investment from General Catalyst, which previously backed Damman’s Storify; Drupal founder Dries Buytaert; and numerous angel investors.

“I want to empower people to go build the organizations, movements, associations and institutions of tomorrow in a bottom-up fashion where transparency is built in by design,” Damman remarked. “People for decades have been complaining that there’s no money for open source… The dream is to create a world where any need around the world, people can create a virtual entity that’s transparent that could be put together quickly to address a need like immigration, refugee relief, or development of open source solution that many of us have, helping women get into tech, or whatever the need is.”