With internet firms and media organizations doubling down on efforts to combat “fake news,” Google has revealed that it’s now opening its “Fact Check” tag to publishers globally and is expanding the feature beyond Google News and into Search.

First announced last October, “Fact Check” represented the latest in a long line of tags Google has offered to highlight specific kinds of articles, including “In-Depth” (for in-depth news pieces) and “Opinion.” 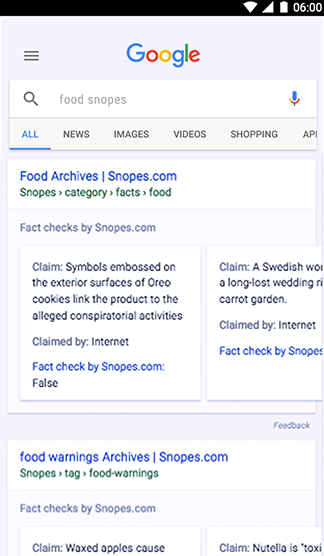 “For the first time, when you conduct a search on Google that returns an authoritative result containing fact checks for one or more public claims, you will see that information clearly on the search results page,” explained the company in a blog post. “The snippet will display information on the claim, who made the claim, and the fact check of that particular claim.”

Though fake news is far from a new phenomenon, the problem has received renewed attention in the wake of two key political events in the past year — Brexit and the U.S. presidency. While the extent to which hoaxes influenced the outcome of those political campaigns is up for debate, but the ease with which false news can spread through social media and the internet in general is cause for concern.

Today’s news comes a day after Facebook announced it was offering its users tips on how to spot fake news. And back in February, Google and Facebook teamed up to help French newsrooms combat fake news ahead of the presidential election.