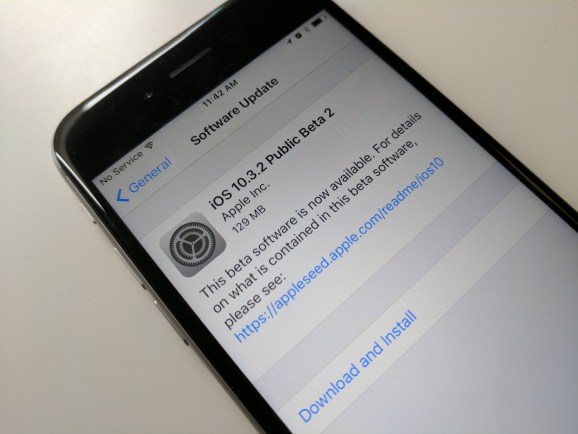 Apple today started rolling out the second public beta of iOS 10.3.2, a forthcoming update to iOS 10.3, following on the release of iOS 10.3.1 earlier this month.

Apple released the second iOS 10.3.2 beta to developers yesterday. Now people who participate in Apple’s Beta Software Program can try it out for free. If you want to try the update but you’re not in the Beta Software Program, you can sign up here. Or you can just wait for iOS 10.3.2 to come out for all supported iOS devices in the coming weeks.

In this beta, iOS devices will automatically send diagnostic and usage data to Apple by default. That said, you can opt out by going to Settings > Privacy > Diagnostics and Usage > Don’t Send. The build also includes bug fixes; Apple says third-party virtual private network (VPN) apps should work normally now, and the same goes for SiriKit car commands. Meanwhile, Apple says there’s currently an issue affecting the core Siri virtual assistant: Its text responses might not be complete in this build.

The build comes out to 129MB, so it might not have very much else in it.