Apple’s latest iPad delivers high value for a low price — relative to its brethren — just like the iPhone SE. That’s kind of the whole point of the device.

It lets Apple compete more effectively with Chromebooks, Windows tablets, and Android tablets. And it lets people use a full-sized iOS-flavored tablet without breaking the bank, which is pretty cool.

This thing doesn’t have the best performance, display, camera, or sound that you can get on an iPad. That doesn’t matter. You’re getting a solid iPad at $329. Cool. Accessible. For lots of people. It’s what Apple should have done maybe five years ago. But Apple decided to wait before checking if a lower price could make the iPad more popular.

I suspect the strategy will work. It’s good enough, which I think is all Apple needs for lots of people to buy it.

Maybe my favorite part of the 2017 iPad is the battery life. Using this thing for 16 hours, on and off, on one charge is really nice. (Apple claims you can use it for browsing, watching videos, or listening to music for up to 10 hours.) It’s enough for a tablet, considering that, at least today, a tablet is a secondary device, and you usually have a computer or a phone to fall back on when the battery dies. In my tests, it just went on and on. The 32.4Wh battery will take a few hours to charge back up, but that’s in line with previous iPads. 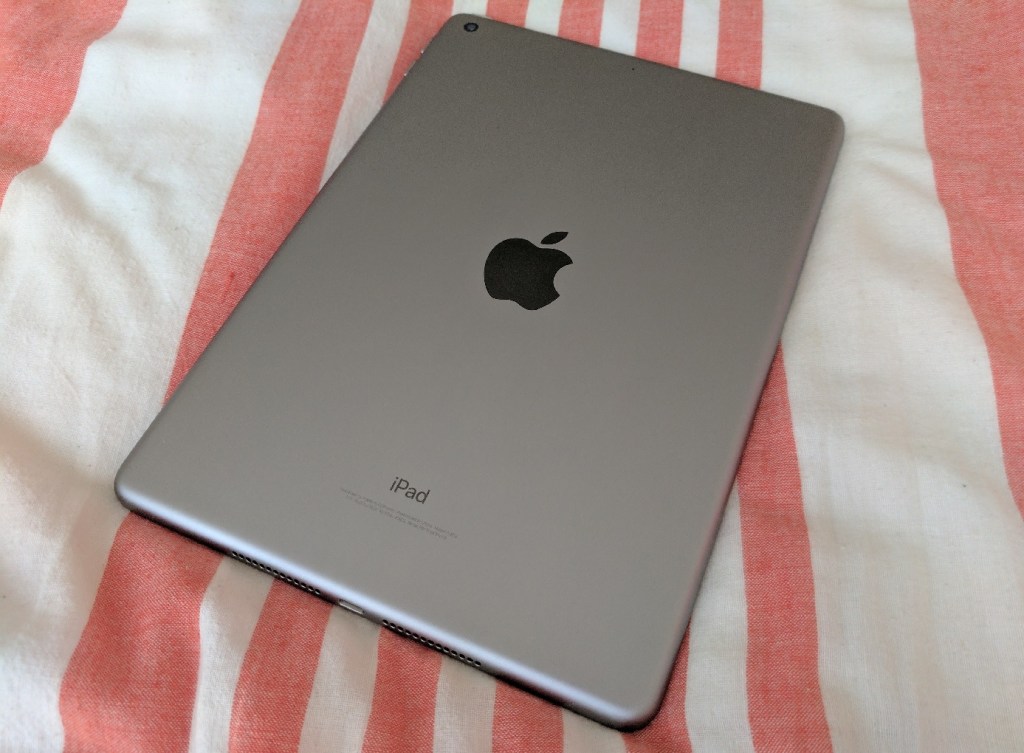 Thanks to the A9 chip first introduced in the 2015 iPhone 6S and 2GB of RAM, performance is quite good, but it’s not quite as good as what you find on the two iPad Pro devices, both of which carry the A9X chip.

The 9.7-inch Retina display looks nice and precise, but there’s something strange about it; my fingers seem to stick on it with friction more than they do on an iPad Pro, and when I tap it, I hear a hollow sound. This is not a True Tone display, it’s not fully laminated, it doesn’t have an antireflective coating, and it’s not a wide-color display. In other words, it doesn’t look or feel as premium as the same-sized Pro version.

Sound is good but not awesome. You have two speakers onboard here, not four like on the iPad Pro.

The 8-megapixel rear camera works well enough but isn’t impressive if you’re familiar with the dual cameras on the iPhone 7 Plus. At least there’s no camera bump.

At 7.5mm, it’s the thickest iPad available today, and with its heft it does hark back to its older predecessors. At just over a pound, it’s just a bit heavier than the smaller Pro model.

Unlike the iPad Pro tablets, this one doesn’t have the three-dotted Smart Connector on the side, so you can’t use Apple’s custom-made Smart Keyboard case with it, or other compatible accessories. And unfortunately it won’t recognize the Apple Pencil. You can get around this; there are fine third-party keyboards and stylii to choose from. I like Logitech’s thin and long-lasting $70 Keys-To-Go Bluetooth keyboard and Adonit’s sleek $75 Pixel stylus, which works with many apps. Just be ready to hear that popping sound each time the stylus hits the screen.

And darn it, Siri isn’t always going to respond to you if you say “Hey Siri.” It only works when the iPad is plugged in.

But when you zoom out and focus less on comparisons, you have a respectable, well-crafted piece of hardware — almost the biggest possible screen for running iOS apps — at an affordable price. The Split View multi-window mode introduced in iOS 9 works very well here, just like on the iPad Pro models, and the display is large enough that watching video in picture-in-picture mode won’t get in the way of whatever else you want to do. If you’ve always thought that an iPad might be nice to have but just isn’t necessary due to its price, this is the product that should make you reconsider.