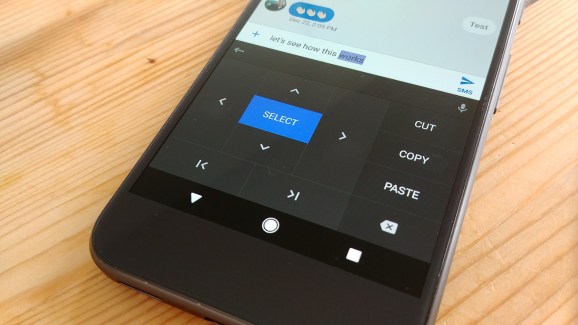 Gboard for Android now has big keys to help you edit text.

Google today announced an update to its Gboard virtual keyboard app for Android that will make it easier to edit and enter text. The feature first became available to the app’s beta users, and now it’s rolling out to everyone.

You can get to the new feature by tapping on the G button or the arrow in the keyboard’s top right corner, then hitting the new icon for text editing — a cursor with arrows pointing left and right — in the suggestions area, Google product manager Linda Lin wrote in a blog post.

From there, you’ll see some big buttons pop up. There are arrow keys pointing up, down, left, and right; a select button in the middle; keys to go to the beginning or end of your text block; buttons for cutting, copying, and pasting; and, of course, backspace. If you hit select and then move around with the arrow keys, you can select exactly the characters you want, and from there you can cut, copy, or paste. Because the buttons are so big, for some people this system will be easier than delicately dragging the pointers to select text.

The feature is not yet available on Gboard for iOS.

Google is pushing out this feature after beginning tests of a new Copyless Paste feature in Chrome for Android, which will let users more easily enter text into other apps based on usage.

Gboard has 500 million to 1 billion app installs on Android, and that popularity has to do with the fact that the standard-issue Google Keyboard for Android was folded into Gboard a few months ago. That followed the introduction of Gboard as a separate app for Android. But when Gboard first came out, it was only on iOS, despite that Android is of course Google’s own mobile operating system.

Other keyboard apps that let you type by gliding like Gboard include SwiftKey and Fleksy.