Chinese ride-hailing giant Didi Chuxing is lending its data to authorities as part of a new initiative to ease traffic congestion.

Earlier this year, Didi partnered with the traffic police department of Jinan, the capital of Eastern China’s Shandong province, which claims a population of more than 7 million. Jingshi Road is one of the most heavily congested thoroughfares in the city, and in March, as part of a trial to help get cars moving more quickly, the city installed smart traffic signals. These use sensors embedded on the road to help sync the traffic lights in accordance with the shifting volume of vehicles.

However, feeding into this is a vast swathe of real-time road data provided by Didi, which analyzes its gargantuan army of drivers to see where traffic is moving and where it is likely to become congested. This helps inform the traffic signal cycles so the gaps between light changes are tweaked to cater to shifting patterns of vehicle movement. 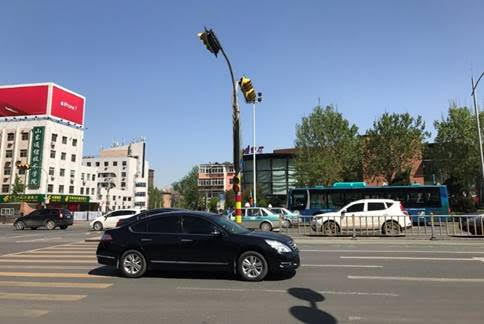 Above: Smart traffic signals positioned at an intersection on Jingshi Road

According to data provided by Didi, delays caused by congestion during rush hour dropped nearly 11 percent. As a result of this initial trial, authorities are now working on installing more smart traffic signal systems throughout the city.

Didi Chuxing was formed in 2015 following a merger between local rivals Didi Dache and Kuaidi Dache. Similar to Uber, Didi Chuxing offers smartphone-based car services, such as carpooling, taxis, and premium cars with drivers. Didi is the clear market leader in China, a fact that led Uber to merge its Chinese operations with Didi in a $30 billion deal last year.

As part of its push to become a global player, Didi last week announced a whopping $5.5 billion funding round.

However, China remains Didi’s primary focus for now, and at the end of April the company revealed a new program to work with city authorities to “resolve deteriorating traffic problems” by offering up a new traffic data platform, called Didi Traffic. This is currently being used by regulators in Shenzhen, Jinan, and Wuhan.

A number of other big data initiatives have sprung up from e-taxi firms elsewhere in the world. Uber has previously partnered with cities such as Boston for projects that involve analyzing trip-level data, including date and time, pickup/drop-off locations, distance traveled, and duration. This data helps establish traffic patterns and informs decisions around road improvements and parking zones, among other infrastructure projects.

Elsewhere, GPS data derived from a number of e-taxi platforms is being used to improve road conditions in developing countries. Last April, the Open Traffic pilot program launched in the Philippines to show how real-time data can improve traffic and road conditions, with the World Bank backing a new open-source platform that used anonymized GPS data from thousands of Grab drivers to establish congestion patterns and travel times. The program was later opened to include other e-taxi companies, including Easy Taxi and Le Taxi, which collectively operate across dozens of markets, and it was extended into new countries, including Brazil, Malaysia, and Colombia.

Didi says that it clocks around 20 million ride requests each day, processing around 2,000 terabytes of data as result. That’s a colossal amount of information, and it’s proving to be a useful byproduct of the company’s ride-sharing service.

Bike-sharing platforms have also risen to prominence in China as a consequence of heavy traffic. Back in March, bike-sharing startup Ofo raised $450 million, with Didi joining the funding frenzy, while competitor Mobike struck a deal with Tencent to bring bike sharing to WeChat users in China.