Chinese ride-hailing giant Didi Chuxing (“Didi”) has announced a new bilingual service as it looks to ramp up its appeal to international travelers.

The company, which merged with Uber’s Chinese operations in a $30 billion deal last year, is rolling out an English-language interface initially for riders in Beijing, Shanghai, and Guangzhou, thus opening the service to potentially millions more tourists and business travelers.

Language capabilities have emerged both as a core selling point and a point of contention in the fast-growing global e-taxi industry. On the one hand, Uber has been gradually rolling out a feature that allows riders to request drivers that speak English, particularly in Latin America, but the company has also been fighting a new ruling in the U.K. that requires drivers to pass an English-language proficiency test.

Simply being able to understand the app’s interface and request a ride is a huge first move in raising the profile of the service outside the Chinese-language market — there is no real need to converse with a driver, given that the pickup and drop-off points are stipulated through the app. While the app isn’t yet allowing riders to request drivers that can speak English — though that would be a next obvious step — it is enabling real-time instant text translations, which should help facilitate communications between passengers and drivers. Bilingual customer service support is also now being offered by email and telephone. 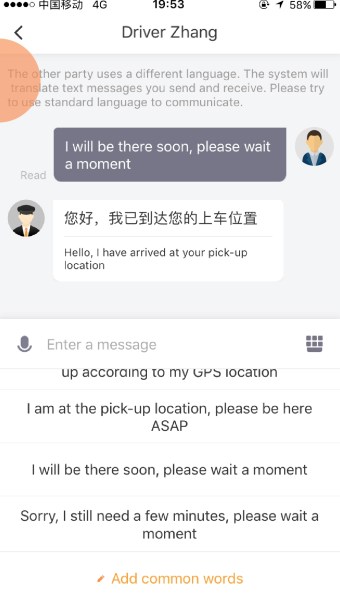 Didi Chuxing was formed in 2015 following a merger between local rivals Didi Dache and Kuaidi Dache, and it offers smartphone-based car services, such as carpooling, taxis, and premium cars with drivers. Today it claims around 400 million users, with up to 20 million ride requests made each day.

Today’s news comes just a couple of weeks after Didi raised a whopping $5.5 billion to build what it calls a “sustainable global mobility ecosystem.” The company has previously revealed that it is eyeing an international expansion, though what form this will take remains to be seen. However, it did recently open a new artificial intelligence facility in Mountain View, California.

And by offering an English-language version of its app, Didi is going some way toward gaining mindshare among the millions of foreign visitors who arrive in the country each year.