In an interview with VentureBeat, DoorDash product manager Jimmy Liu said customers who saw personalized recommendations on average “were over 25 percent more likely” to place an order versus people who saw the most popular restaurants in their area.

We talked with Liu on the eve of the company’s announcement today that it’s rolling out these machine-learning based recommendations to all of its users, after testing it on increasing percentages of its customer base. Millions of users have already seen the recommendations, the company said.

Liu said the 25 percent lift from recommendations came specifically from email campaigns. Machine learning (ML) based recommendations made within DoorDash’s app saw a lower lift on orders, Liu said. That’s logical, he said, because if someone is already within the app, they are already showing an intent to order — and so getting an additional lift from recommendations is comparably harder to do than for email, where someone may not be actively searching. 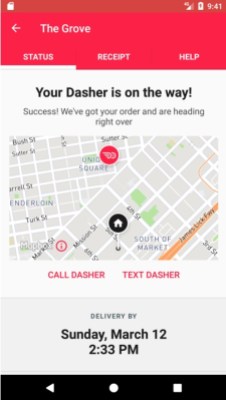 Above: DoorDash now provides real-time location of their delivery person

The results come six months after DoorDash announced it’s using ML to improve its recommendations. In a post at that time, Doordash explained it is using Bayesian network structure learning, and the so-called hill-climbing approach, to learn what people like based on what they’ve previously shown an interest in.

Learn how developers and brand marketers are using AI to grow their businesses at MB 2017 on July 11-12 in SF. Get your 50% off Early Bird ticket by May 19!

But it also found some less obvious results: If you like fast food, in turns out you’re likely to enjoy Chinese food too.

Targeting customers with new offers based on machine-learning intelligence makes sense, because it’s likely to make their decision-making easier, said Liu. “Everyone knows DoorDash has a large selection,” Liu told VentureBeat. “From my house I can order from a thousand restaurants. It’s very hard to narrow down what I want.”

The new “suggested items” feature will provide two to three new order ideas per month, the company said. The suggestions are designed to expand your horizons from your already chosen options. So if you’ve indicated from your searches that you like Asian food, DoorDash might offer up Korean or Japanese restaurants, even if you haven’t previously specifically searched for or ordered those Asian cuisines.

The company tracks 40 different user behaviors to make its recommendations, he said. It may know that you like Asian food even if you haven’t ordered it; you may have simply searched for it a lot.

Also, a new “most popular items” feature announced today will highlight the hottest items on a restaurant’s menu.

The company decided to build the ML technology entirely in house. “This gives us more control and ability to fine tune things to how we want them,” Liu said.

DoorDash didn’t hire machine-learning experts, Liu explained. Instead, it relied on its existing three-person growth team. “Our engineers were passionate about it,” he said. “It came from learning and experimentation, seeing what works and what doesn’t work. We’re happy to get results.”

Liu said the recommendations are just the first step toward improving interactions with customers using machine learning. Going forward, Liu said, DoorDash is likely to ask new customers up front what their favorite cuisine is, in order to start implementing recommendations more quickly.

DoorDash also today announced a new “star ratings” feature for providing feedback on both food and delivery, and a way to offer more granular restaurant ratings.

This reflects an evolution from last year, when DoorDash talked down the star-rating system Yelp uses.

Along with photos and logos, DoorDash found that ratings are another key signal that helps customers with their decision making.

Finally, DoorDash is offering a new Live Map feature to follow your DoorDash driver’s progress en route. The real-time pin of the Dasher’s GPS location is shown in the order status tab, and expands on the status updates DoorDash already offered.