IFTTT, the platform that allows users to create customized, conditional interactions between apps, online services, digital assistants, and devices, has announced that it’s opening its platform to individual developers, allowing them to build and publish their own applets for others to use.

Founded in 2010, IFTTT — an acronym for “If this, then that” — became known for its online service that lets users set up automated actions, which it called “recipes,” between two apps. Last August, IFTTT revealed it was to begin allowing third-party companies to create recipes and bring IFTTT functionality to their own apps and services through the IFTTT partner platform. Initial invited partners included Adobe and smart doorbell startup Ring.

A few months later, IFTTT opened this partner platform to any company and scrapped its recipe-based system, replacing it with applets, a more extensive version of the technology that’s capable of bundling multiple actions into a single trigger. This could be a single verbal statement, such as saying “morning routine” to Amazon’s Alexa to activate the coffee maker, turn the light switch on, and activate a playlist. Earlier this month, Domino’s announced a partnership with IFTTT to allow customers to automate their smart home devices according to the status of their pizza delivery.

From today, IFTTT is making this capability available to individual developers via a free “maker” tier that lets anyone build and publish applets. 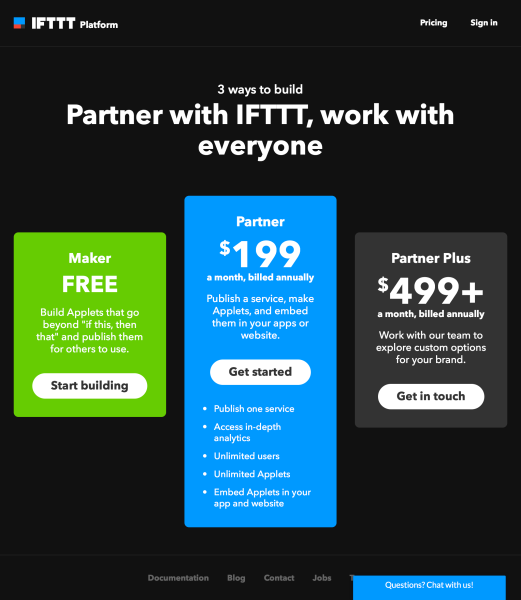 So now, in addition to the $199 / month Partner tier and the tailored $499+ Partner Plus tier, anyone with an interest in IFTTT can build applets that work with the 430+ service APIs that are currently on the platform.

It’s worth noting here that until now, anyone has been able to build applets that work with two IFTTT services for personal use. But with this new offering they can publish their applets for others to use and showcase everything on a dedicated maker profile page.

Additionally, people can create applets that work on any connected device, regardless of whether they own one of these devices themselves. And, above all else, makers can now build applets with multiple actions, as partner companies have been able to do since last year.

“Over 200,000 makers already use IFTTT to play, iterate, and test,” said IFTTT cofounder and CEO Linden Tibbets. “Giving them access to the tools our partners have is a no-brainer — it’s a win for both users and partners. We’re excited to see what they create and in the future, we expect to see new services originating from makers as well.”

In a way, this launch is a little like smartphone app stores allowing any developer to build and create apps. It enables IoT companies to tap a gargantuan developer pool, with some potentially interesting connected device and service integrations coming to the fore. By opening to individuals, developers could have their applets picked up and featured by some big name partner companies, including Domino’s or Adobe.