History is messy. Even messier is the business of trying to erase history. Messiest of all is any attempt to rewrite literature: History may be written — and rewritten — by victors, but mess with literature and you have a problem on your hands.

Nest Labs, the highest-profile company in the Other Bets category under Alphabet’s corporate umbrella, unveiled a new security camera today. As we reported, it has some interesting innovations that borrow from Google’s AI.

For the announcement, Nest provided some images, most of which highlighted its simple, elegant design and how nice this security camera can look in a typical home. Some of these photos featured the new camera on bookshelves. Because I am the kind of book nerd who glances at book covers when people are reading them in public, I scanned this fictional bookshelf.

At first, the selected books seemed as carefully manicured as the Nest’s design: Two Everyman Library philosophy tomes I would never crack open, two more Everyman Library volumes of Jane Austin. And nearby, the Nest camera staring, sentry-like, next to a photo of a woman in half profile kissing another woman on the ear, beneath Stephanie Reents’ The Kissing List.

You have to wonder whether this was a bookshelf conjured by a team of male marketing execs trying to imagine what a successful woman’s book collection might look like. And there, in the thickest layer of a tasty book sandwich, between Salinger’s ode to troubled weddings and Nathaniel West’s Miss Lonelyhearts, I saw Simone de Beauvoir’s The Second Sex. 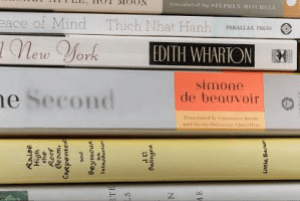 Only the words on its spine read, “The Second.” There was no “Sex,” second or otherwise.

I know this edition of de Beauvoir’s The Second Sex. It’s a Vintage paperback, where the word “Second” is blurred out by the title’s designer — not Nest, not Google’s AI — as you can see here. One thing the designer, let alone de Beauvoir, would never want is the word “Sex” deleted from the cover, as if the 832-page book were about accomplices to a duel, or an avant-garde novel about what happens in a single second of time.

Last month, the U.S. Labor Department said it had evidence of “systemic compensation disparities” at Google, with evidence that “discrimination against women in Google is quite extreme, even in this industry.” This week, the search giant that promises precision targeting to its advertisers claimed it can’t afford the time to compile data to verify or deny that wage gap.

Nest has not responded to a request for comment on the photo.