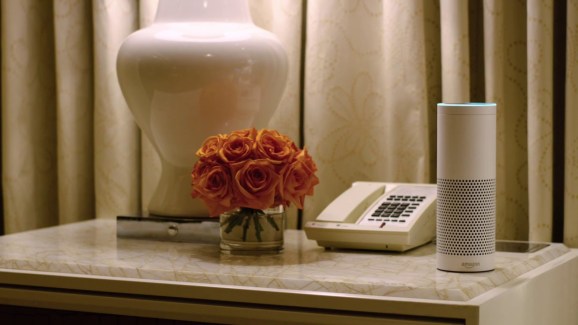 As competition heats up between intelligent assistants like Siri and Alexa, the battle for your attention is spreading beyond the workplace, car, and home. Hotel rooms, Airbnb listings, and vacation rentals are increasingly joining the fray. Now Hyatt Hotels, with a portfolio of more than 700 properties in 56 countries, is also considering the use of intelligent assistants in its rooms, a company spokesperson told VentureBeat in an email.

Hyatt joins a growing list of corporate hotel chains interested in smart speakers. Following a commitment by Wynn Las Vegas to put an Amazon Echo into every one of its rooms by summer, Marriott International, the largest lodging company in the world, said that it’s testing smart speakers like Apple’s HomePod for guests to use in its hotels.

Independent of Hyatt Hotels’ exploration of the merits of adding smart speakers to the travel experience, Hyatt Regency Lake Washington general manager Rusty Middleton and his staff began exploring the idea months ago as a way to augment the guest experience at the 347-room hotel near Seattle scheduled to open July 10.

“I don’t know what percentage of the population have Alexas, but I know from customer feedback they want some of the same services and experiences they have at home during a hotel stay. That’s why we’re considering it,” he said.

With an intelligent assistant in their room, customers could potentially order their car from the valet or request fresh towels from housekeeping.

“Our corporate office is on a parallel track investigating some different technologies, so we want to make sure we’re joining forces as we investigate what makes sense,” Middleton added.

Test results will not be shared publicly, but rather will be used to, a Hyatt Hotels spokesperson told VentureBeat in an email.

Among options being considered by Hyatt Regency Lake Washington is The Vacation Rental Concierge, a voice app made by Dana Young, who runs a vacation rental in Loomis, Washington with his mom Kathleen Lindsay.

Released in April, Young’s bot remains one of the only concierge voice services available today in the Alexa Skills Store or Google’s newly made App Directory. The demand, Young said, took him by surprise.

Even without marketing or outreach, it was only a matter of weeks before he heard from vacation rentals in various parts of the world, including the Hyatt Regency Lake Washington and Coachella Valley vacation rental company AvantStay.

“I think it is absolutely inevitable that if you’re going to be in the vacation rental business, your guests will begin to expect the same kind of capabilities they get at hotel chains, and hotel chains are adopting this kind of technology all over the place,” Young said.

By simply saying “Alexa, let me talk to the concierge,” people can find out the basics, like house rules and the coveted Wi-Fi password. But the feature can also be customized to answer particular questions or highlight nearby gems, like recommended restaurants or Jet-Ski rentals near a lake vacation rental.

For personalization, Young also created a website where hotels and Airbnb hosts can enter answers to questions or make their own questions based on guest input.

Before the proliferation of intelligent assistants, lots of this information was kept on a list somewhere in the house. Now it’s all contained in a smart speaker that never gets tired of answering guest FAQs.

And since Google Assistant and Alexa can now make calls, the assistant could potentially call the owner if a guest needs something or in the event of an emergency.

Which assistant to pick?

The recent rush of activity in the intelligent assistant-smart speaker market has made it tougher to pick one over another, however.

Joining industry leaders Echo and Google Home, Apple debuted its HomePod smart speaker on Monday. Samsung is also reportedly working on its own smart speaker with Bixby inside. The Harman Kardon Invoke with Cortana inside is scheduled to hit Microsoft store shelves this fall.

Then there’s the consideration of what a specific smart speaker says about your property. Will an Echo look sort of cheap or outdated in a year or two? Is it better to wait for the newly released Echo Show? Apple claims to be building an upscale smart speaker. Does that mean hotels will have HomePods?

Then again, guests may prefer upscale devices from companies such as Essential, which says its products will be agnostic to the intelligent assistant inside.

Earlier this year, vacation rental company HomeAway began using keyless August Smart Locks for its rental properties, and in February the startup Burner launched a chatbot for Airbnb hosts to chat with guests via SMS.