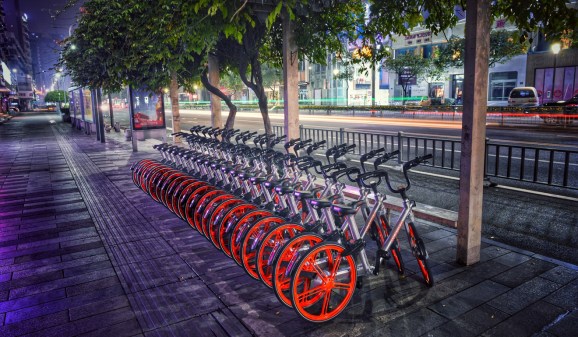 Founded out of Shanghai in 2015, Mobike has been available in dozens of cities across China since it first launched last year, and it landed in Singapore back in March. Today, the company announced that it will launch in the U.K. cities of Manchester and Salford later this month, taking its total city count across its three markets to 100.

The U.K. launch marks the start of a major European expansion for Mobike, with plans to arrive in a “series of European cities” over the next few months.

“We are already in talks with a number of other cities around Europe and are sure the successful pilot will be the first of many partnerships, allowing us to make cycling the most convenient and affordable choice for those in cities all around Europe,” said Mobike U.K. general manager Steve Pyer.

Mobike, for the uninitiated, provides cities with the bikes and the technology platform, including mobile apps. For durability, and to help sidestep costly repairs, the Mobike bikes are chainless, sport puncture-proof airless tyres, and are supported by an anti-rust aluminium frame. To unlock a bike, a user scans the QR code with their phone.

Mobike has raised $325 million in venture funding — with Tencent leading a $215 million round in January of this year — and notable previous investors include Foxconn, Temasek, and Sequoia Capital.

Similar to the way data is increasingly being garnered from car-based ride-sharing services to improve transport infrastructure in cities, Mobike uses GPS in its bikes so it can access real-time trip data to properly allocate its fleet and analyze how variables such as weather and traffic impact its service. This also allows it to help city planners “in a variety of smart urban planning projects,” according to Mobike.

“Our aim is to be responsible, sustainable, and innovative,” continued Pyer. “We’re confident that Manchester and Salford and their residents will immediately see the benefits of our services, and the city will become a showcase for the urban transformation that is possible when cycling usage rises and city planning leverages smart data.”

With congestion a growing concern for conurbations globally, bikes have emerged as a hot trend among investors. Last September, Didi Chuxing invested “tens of millions” into Ofo, a rival bike-sharing startup that went on to close a whopping $450 million round earlier this year. And over in the U.S., LimeBike recently raised $12 million in a round led by Andreessen Horowitz.