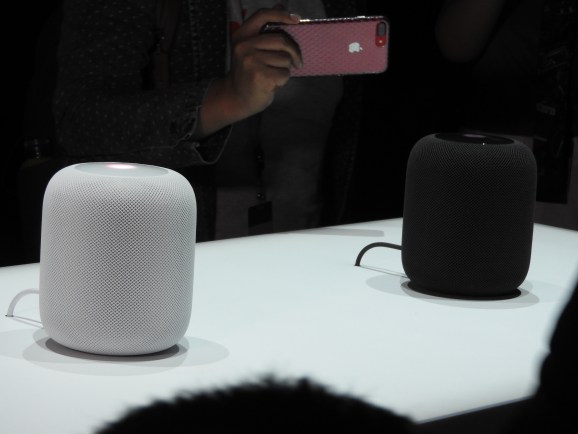 Price is the most important factor for consumers shopping for smart speakers like Google Home, Amazon Echo, or the yet-to-be-released Apple HomePod, according to a Morning Consult survey released today.

In the poll, roughly 30 percent of the people said price was the most important factor when considering the purchase of a smart speaker, while 14 percent said accuracy of the device’s voice recognition was most important.

The poll of 2,200 respondents was conducted between June 8 and 12, just days after the release of Apple’s HomePod.

Intelligent assistants like Siri, Cortana, Alexa, and Google Assistant can help you do a range of tasks with your voice, from sifting through emails to turning on your sprinklers or helping you cook.

There was no such thing as a smart speaker until the Amazon Echo made its debut in November 2014. This year, based on its own survey, voice analytics company VoiceLabs predicts that nearly 25 million will be sold, quadrupling sales that occurred in 2014 and 2015.

The fact that people are willing to make price the number one factor for smart speaker purchases could spell bad news for Apple’s HomePod, which will be retail later this year for $349.

In this publication and others, the competition between tech giants to promote their chat app platforms or intelligent assistants is often referred to as chat wars, but as the Morning Consult survey becomes public, it appears there’s also a price war.

The price of the industry-leading Amazon Echo started at $200 and has been a steady $179 for much of its history, but last month that price dropped to $139. In fact, with the exception of the relatively new Echo Show and Echo Look, virtually every Alexa-enabled device in the Amazon marketplace has gone down in price or is currently on sale.

At those rates, for the cost of (or less) a single Apple HomePod, a household could more or less blanket their home with Google Assistant or Alexa coverage.

One factor that may work in Apple’s favor: brand recognition. A USA Today poll conducted last week found that 80 percent of consumers are familiar with Siri, compared to 67 percent for Alexa and 55 percent for Google Assistant. A Morning Consult poll taken in March had similar results.

The price wars may just be getting starting, but the marketing wars between tech giants to convince people to let their intelligent assistant into their homes has been underway for months now.

This was wholly apparent to anyone who watched the Super Bowl, Academy Awards, or NBA Finals this year and got their fair share of Amazon Echo, Google Home, and IBM Watson commercials.

In the IRL marketing files, today Amazon placed a 79-foot tall Echo in Times Square, the tallest physical ad ever constructed in the iconic ad-filled district of New York City.