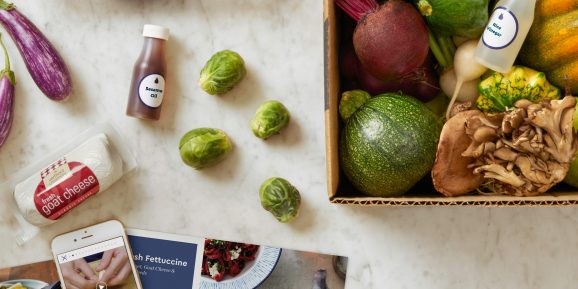 Blue Apron and Delivery Hero already had their work cut out for them — staging IPOs at a time when competition in the food-delivery market has devoured several startups. But that task became much more difficult Friday when Amazon said it would buy Whole Foods Markets for $13.7 billion.

Both Blue Apron and Delivery Hero priced their offerings today, taking the next step toward their respective IPOs. Neither had much choice at this point, beyond withdrawing their offerings. The impact of Amazon’s Whole Foods acquisition remains uncertain for now, which leaves a window for Blue Apron and Delivery Hero to enter the public market, although that window may soon slam shut.

Blue Apron updated its prospectus to price its IPO between $15 and $17 a share, which would translate to proceeds as high as $510 million. Berlin-based Delivery Hero, meanwhile, plans to raise as much as €996 million ($1.1 billion) in an offering priced between €22 and €22.5 a share.

In its updated filing, Blue Apron added a line in its risk-factor section that says: “business combinations and consolidation in and across the industries in which we compete could further increase the competition we face and result in competitors with significantly greater resources and customer bases than us.”

Of the two companies, Delivery Hero has less to worry about for now because Whole Foods stores are primarily located in North America, with just nine in the United Kingdom. But Amazon tends to export its new business models abroad and could easily buy a grocery chain or restaurant-delivery company in Europe.

How Blue Apron and Delivery Hero fare before and after their IPOs may have considerable impact on funding for other delivery startups. Certainly Instacart, which counts Whole Foods among its investors, faces an uncertain future. An Instacart spokesperson told TechCrunch Friday that “Amazon just declared war on every supermarket and corner store in America.”

In light of this, the Whole Foods acquisition will be a central topic during the duo’s IPO roadshows with potential investors. Still, there are reasons to think companies like Instacart and Blue Apron may actually benefit in the short term. The war that Amazon has started will prompt retailers and restaurants to quickly come up with a strategy to compete against the ecommerce giant, which could trigger a wave of partnerships or even acquisitions of independent delivery startups.

Whatever the long-term impact Amazon buying Whole Foods has on the already competitive food delivery market, it seems prudent for companies to raise money sooner rather than later.