In the latest move to bring more bots to Twitter Direct Messages, Sprout Social today announced the launch of its Bot Builder platform. Bot Builder is geared toward helping social media, customer service, and engagement teams create their own Twitter bots for conversations in Direct Messages.

Like bot-maker platforms for other chat apps, Bot Builder on Sprout Social promises to help people with no coding or technical knowledge create functional bots within a matter of minutes.

Bot Builder access is only available to customers of Sprout Social Enterprise, a $249 a month plan.

Along with names like Conversable and Dexter, Sprout Social was one of the first to offer brands the ability to create Twitter bots since their first iteration — Welcome Messages and Quick Replies — were introduced last fall. 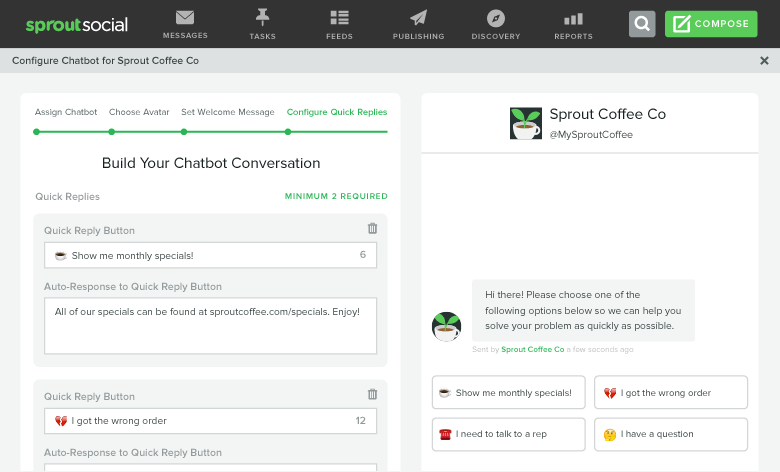 DM bots on Twitter have seen some upgrades in recent weeks. Last week, buttons were introduced that give a bot the ability to sell products, share links, take actions within Twitter, and carry on a conversation. These kinds of buttons have become a staple of the bot interface for all manner of chat apps, from Facebook Messenger and Skype to Slack and Microsoft Teams.

Last month, Twitter brought bots directly into Twitter feeds with a new ad unit that brings them from one tap of a finger or click of the mouse into a Direct Message conversational experience with a brand.

Twitter is doing its best to keep up with other chat apps that also want to connect businesses with customers, from Facebook Messenger and WhatsApp to Skype and Apple’s Business Chat.