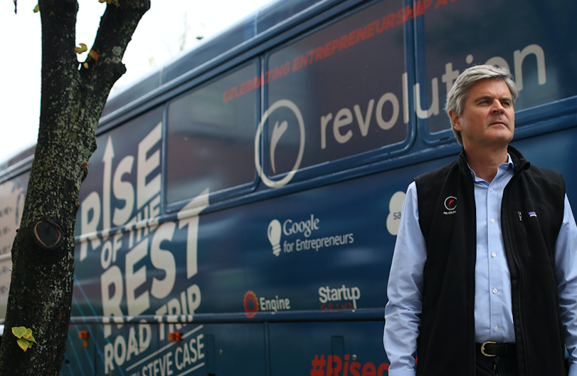 Steve Case's Rise of the Rest is a nationwide effort to work closely with entrepreneurs in emerging startup ecosystems.

Image Credit: Rise of the Rest

This worry motivates AOL co-founder Steve Case: America’s prosperity could be at risk if venture capital continues to flow to Silicon Valley and other elite tech hubs at the expense of the rest of the country.

An economic evangelist for America’s heartland, Case, 58, in recent years has been on a mission to redirect critical investment to innovators in places like Cincinnati, Des Moines and Albuquerque.

And for one day in October, Case will turn his attention to Lancaster.

Case announced Monday that his Rise of the Rest bus tour will be coming to town Tuesday, Oct. 10.

At a special public event, Case will listen to eight central Pennsylvania entrepreneurs pitch their ideas. The best one gets a $100,000 investment from Case himself.

Joining him will be J.D. Vance, a venture capitalist best known for his top-selling memoir Hillbilly Elegy.

Case that day will also visit Harrisburg and York.

The reason for hitting all three cities? Case said southcentral Pennsylvania could better compete with America’s big cities if business and other leaders in the multi-county region work together.

It’s his third year of boarding the bus and banging the drum for tech startups in fly-over country.

So far Case has been to 26 cities and invested more than $4 million in over 50 startups, all to encourage inventors and innovators in places where manufacturing and other industries are in decline.

Case worries that the concentration of talent and capital in already thriving hubs on the coasts will only divide and weaken the nation.

“Right now, 75 percent of venture capital is going to three states: California, New York and Massachusetts,” Case said Monday in a phone interview as he was traveling to the Aspen Ideas Festival. “The other 47 states, including Pennsylvania, are fighting over 25 percent. We think that’s crazy.”

Case said the eyes of many in Silicon Valley were opened when Donald Trump surged to victory with the votes of struggling blue-collar workers in rust-belt Ohio, Pennsylvania and Michigan.

“They feel left out and left behind by digitization and globalization,” Case said. He said he understands that the rise of robotics, driverless vehicles and other tech-driven disruption only increases worker anxiety.

But he’s betting, with his money, that discovering innovation in unlikely places will spur a turn-around, restore hope and dispel fear.

“It’s about ushering in the future,” he said.

Lisa Riggs, president of the Economic Development Co. of Lancaster County, who worked to bring Case’s tour to Lancaster, said the Rise of the Rest visit will shine a spotlight on a growing startup culture in Lancaster, better known for apple dumplings than whiz-bang apps.

“What’s really nice for us is it showcases that you don’t have to be a major metro market,” Riggs said. “You can have smaller, almost rural communities, that also have these sorts of innovators.”

She said the Lancaster area is home to health care, agriculture, energy and software development startups that could compete for the $100,000 prize.

The location of the Oct. 10 event has yet to be determined, but public activities will begin at 3 p.m. with a discussion led by Case and Vance.

A pitch competition will follow from 4 to 6 p.m. The event wraps up with a networking party from 6 to 7:30 p.m.