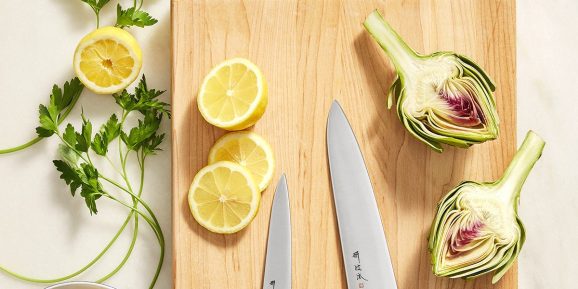 Image from a chopping station featured on Blue Apron's site.

Blue Apron made an uneasy debut on the NYSE today, following a dramatic repricing of its offering Wednesday, as investors weighed the value of the on-demand food-delivery startup now that Amazon is threatening to expand into its market.

On Wednesday, Blue Apron said it would price its offering at $10 a share, below the initial range of $15 to $17 a share. The stock debuted at $10 a share this morning.

In turbulent markets, repriced IPOs aren’t unheard of. With most U.S. stock indexes and many tech giants trading near record highs, however, Blue Apron’s last-minute discount is telling.

The company filed to go public early this month, establishing its initial price range one business day after Amazon said it would buy Whole Foods Market. While neither company is actively competing in Blue Apron’s niche of delivering ready-to-cook meals with fresh ingredients, the combination of the two creates an entity well positioned to push into the market as a new revenue stream.

Blue Apron has emerged as the leader in the beleaguered meal-delivery market, following the expirations of rivals such as SpoonRocket, Maple, and Sprig. As such, Blue Apron may become an acquisition target of a large retailer like Walmart that wants a quick way to compete against Amazon in the space. The discounted IPO increases the likelihood of such an outcome.

Following Amazon’s move, Blue Apron warned investors in a revised filing that it may face “competitors with significantly greater resources and customer bases than us.” That single line inside a 214-page prospectus seems to have caused investors to recalibrate Blue Apron’s worth just as its roadshow was beginning. Blue Apron’s offering price valued the company at around $1.9 billion, well below the $2 billion valuation it earned during a 2015 round of private fundraising.

The impact that the Amazon-Whole Foods deal had on Blue Apron’s IPO is underscored by the pricing of another expected IPO from DeliveryHero, which is focused on Europe and other markets beyond North America. Berlin-based Delivery Hero initially planned to raise as much as €996 million ($1.1 billion) in an offering priced between €22 and €22.5 a share. Reuters says that DeliveryHero’s offering is likely to price at the high end of that range, which would value that company near $5 billion.

Of the two companies, Delivery Hero has less to worry about for now because Whole Foods stores are primarily located in North America, with just nine in the United Kingdom. Amazon does tend to export its new business models abroad and could easily buy a grocery chain or restaurant-delivery company in Europe, but investors there don’t seem too concerned about that right now.

The ripples of Blue Apron’s IPO will be felt beyond its first-day performance, potentially affecting the funding for other delivery startups. On Wednesday, Tintri changed its plans for an IPO that was also expected to launch today. Last quarter, Tintri lost $2 for every dollar in revenue brought in.