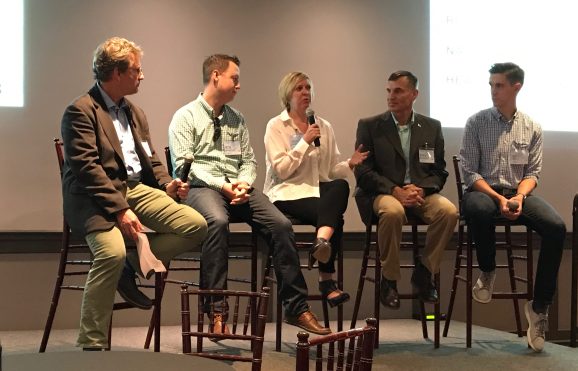 Starting a tech company in Silicon Valley is very, very hard, and conventional wisdom holds that doing so elsewhere would be even more difficult. But is it? While founders everywhere confront such challenges as determining product-to-market fit, developing supply chain management, and establishing reliable, recurring revenue streams, those outside Silicon Valley — or New York and Boston, for that matter — may avoid some of the hurdles of setting up in a tech hub.

Weighing in at a recent VentureBeat event to kick off our Heartland Tech channel and upcoming Blueprint event, a panel of three entrepreneurs and the head of the local economic development agency from Reno, Nevada, discussed what it takes to build companies there.

Joining the discussion were Rob Armstrong, cofounder and SVP of product at Bombora, a provider of B2B services that help companies track which of their products are being viewed by potential customers; Heather Goldman, co-CEO and cofounder of Capstak, which has built proprietary technology that connects capital seekers with capital sources throughout the U.S. and global commercial real estate markets; Mike Kazmierski, president and CEO of Economic Development Authority of Western Nevada (Edawn), a nonprofit that works to attract, retain, and promote jobs in the Reno area; and Nate Pearson, CEO and cofounder of TrainerRoad, online cycling software that aims to make you a faster cyclist.

Cheaper rent, a supportive business community, and a high quality of life were cited as being among the benefits of starting a tech company in Reno. “If there was one thing I might have done sooner and better, it would have been to move to Reno earlier,” Capstak’s Goldman said.

The panelists were split about access to capital. TrainerRoad’s Pearson explained that he bypassed outside investors. Bombora’s Armstrong said his company, too, was bootstrapped. Meanwhile, Goldman described relying mostly on outside investors.

They also had different perspectives about access to talent. Armstrong and Goldman agreed that the University of Nevada, Reno was a pipeline for skilled workers. Pearson, who also depends on the local talent pool for about two-thirds of his 56 employees, has had to look elsewhere for engineers.

Even as Silicon Valley remains a magnet for tech workers, some parts of the San Francisco Bay Area saw emigration in 2016. This suggests that life here is not all it’s cracked up to be. Reno, anyone?

The interview has been edited for clarity and length.

VentureBeat: When we talk about the different pillars needed to create a startup community, we often hear about the critical role of venture capital. Nate, as a Reno native, has grown his own company. He’s only met two VCs in his life.

Nate Pearson: I think they were angels. Not even VCs.

VB: So, how important is venture capital in your path as an entrepreneur in Reno?

Pearson: In mine it’s not important at all. When we started — I’m a tech founder. I built the product in about 18 months while I worked a full-time job. My mom begged me not to quit that full-time job, so that’s how it was launched. After we launched, I waited until my salary on my new product replaced my salary on my Fortune 500 job. Then we just kept hiring people based on revenue as it went through.

VB: What about the others? What were your sources of funding?

Rob Armstrong: Bombora was bootstrapped as well. The dollars go a lot further in Reno than they do in the Valley or New York.

Heather Goldman: I’m actually on version 2.0. I cofounded an internet company in 1999 that I sold in 2004. We did five rounds of venture. I’m very cautious about venture. But for us it’s extremely important. We’re looking at a high-growth company. As we get through this first round of angel funding, we’re looking at accelerating growth. But we don’t just look at venture. We also look at private equity and other sources of venture lending for accelerating our growth. For us, it’s actually critical. Being able to monitor the business, the metrics, and manage our business into the valuation rounds that will allow us to raise accretive capital is very important.

VB: Is it local venture money? Does that matter?

Goldman: For us, it’s mostly coming from outside the market.

VB: Another critical pillar is hiring. A big part of Mike Kazmierski’s work is attracting, training, and retaining a workforce. Rob, you’ve worked in both New York and Reno. What are the pros and cons of finding quality people in Reno?

Armstrong: Any company needs basically two types of people. One is those with experience, who are running departments and leading strategy. And then you have the doers, those that will fight and die for the company. The latter — I think we easily think that if you come from the city, New York or the Valley, you’re basically that type of a person. But there are people all over this country that will fight and die for a company they love. In a city like Reno, your uniqueness in that market is that much more of a shining star. We’ve found a tremendous amount of talent from the University of Nevada, Reno. As far as bringing in talent, those that have experience, we’re able to sell against places like New York and the Valley with the benefits of living in a place like Reno. It doesn’t always work out that way. We do have a distributed workforce. We have people that are based here [in the Valley], too, that do sales and work with customers more.

Pearson: I’ve actually had a tough time hiring engineers in Reno. We’re trying to do a process that — we take someone from the university very early and train them in an early job, and then as they hire — I hope Udacity can help us with that. But a third of my workforce is remote. From the beginning I set my company up to be a remote workforce. We have engineers in Alabama, Texas, Missouri, Wisconsin, Indiana. The salary I can pay them — I can get a great engineer who doesn’t have a Facebook or a Twitter on their resume, who may have worked for a small insurance company, but they’re rock stars. They’re so happy to work. I try to offer a great culture in cycling, a fun way to work. I pay them way below Bay Area market wages, but way above Alabama market wages, and they love it. They stay with it. I would say the retention factor is tremendous. About five years in, I have 56 employees and I’ve never had a salaried employee quit. I have some support people in college who graduate and move on to a full-time job, but I’ve never had anyone quit otherwise, because they love it.

VB: What about other challenges beyond hiring? Heather, I understand you just relocated to Reno.

Goldman: We relocated our business from New York to Reno. If you told me a year ago I’d be living there I might have found that funny. But we love it, we really do. You talked about the retention factor. That’s hugely important. We were able to recruit our CTO out of his company, which had just been acquired by private equity and was looking to relocate him to another city. He wanted to be in Reno. For us, though, it’s a combination of factors where we both bring some of the resources and relationships and know-how that we’ve acquired being in venture and the financial markets for 20-plus years to Reno. At the same time, we’re able to take advantage of an environment and an extraordinarily supportive community, exemplified by Edawn. I’ve literally had people say to me — as we were launching and building our business — it’s like a barn-raising. The entire community is coming up with resources. We’re partnered at the Innovation Center, which was built by the University of Nevada, Reno in partnership with Switch. Other major tech companies are looking at supporting major initiatives in the city around STEM and STEAM education. For us, it’s been a combination of being able to take the best of a local market — if there was one thing I might have done sooner and better, it would have been to move to Reno earlier.

Pearson: It’s kind of funny, but a challenge in Reno is all the support. I have to tell Edawn and Mike, “No, I’m cool, we don’t need anything right now.” Everyone is rooting for each other. It’s a very close-knit community.

VB: We’re talking mostly about Reno, obviously, but you have employees in other states. What are the similarities between your experience in Reno and your employees’ experience in their local cities?

Pearson: These people live in a place that’s beautiful to them. That’s a key thing. One thing Reno has that we’re trying to overcome is Reno 911. [laughter] People having a different opinion of Reno than when you get there and you realize that at lunch you can ski. You can go mountain biking and running. There’s sunshine year round. I have an employee in Missouri who just bought 230 acres. Can you imagine doing that in the Bay Area? For him, that’s his beautiful place to work, and he can make a lot of money. His money goes so far. He’s an outstanding engineer. He doesn’t want to drive an hour to work every day. It’s great.

VB:  Mike, we haven’t heard from you yet. For the entrepreneurs you’re in touch with, what’s a need that might be going unfulfilled?

Mike Kazmierski: First, you didn’t hear from me because you’re hearing from the people that are doing this. They’re making decisions that are really from the heart. We’ve moved more than 150 companies to Reno and Sparks from throughout the nation, and internationally as well. Moving a company is easy. You make the dollars and cents work. The company says, “Hey, that’s a smart thing to do.” They make the decision. But moving people isn’t easy. When you get an entrepreneur that moves from New York or other parts of the country and decides to grow their company in Reno, what that tells you is they believe in what’s happening in Reno. Again, the [Reno] 911 thing hurts, but what’s happening in Reno is real. It’s a different community. If you haven’t been there in the last three years, you need to come. We’ll show you the real Reno, because it is the place. It’s becoming the place. We want you all to come out and visit us.