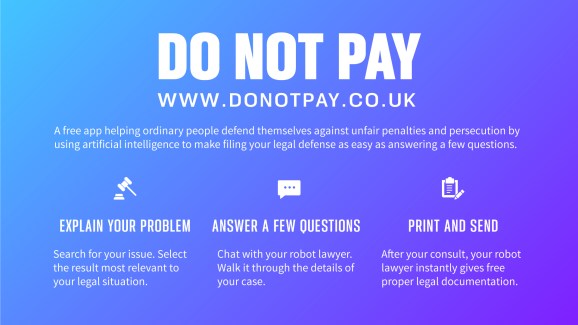 Starting today, DoNotPay bot is able to dispute parking tickets and perform 1,000 other legal services for residents of the United States and United Kingdom, creator Joshua Browder has informed VentureBeat. Before today, the bot was only able to operate its parking ticket-fighting service in a limited number of cities. DoNotPay is perhaps best known for helping people successfully challenge hundreds of thousands of parking tickets in London and New York.

Available on the web only, the new bot operates more like a search engine. Just type in your problem, and DoNotPay will serve up a series of suggestions.

DoNotPay has been called a lawyer bot, but it’s also a kind of personal consumer watchdog and there when the average person runs into technical or bureaucratic challenges and wonders “Now what?”

You can challenge developers who want to build next to your property, get your deposit back from a landlord, dispute an eviction notice, or take steps to address building safety.

In the financial realm, DoNotPay will now help you challenge fraud charges or credit report score increases. Should you lose a member of your family, the bot can help you notify their bank. It will also help you apply for maternity and paternity leave, protect you against workplace discrimination, cancel a gym membership, or help you get a refund.

“I originally started DoNotPay two years ago to fight my own parking tickets and became an accidental witness to how lawyers are exploiting human misery,” Browder told VentureBeat in an email. “From discrimination in Silicon Valley to the tragedy in London with an apartment building catching fire, it seems the only people benefitting from injustice are a handful of lawyers. I hope that DoNotPay, by helping with these issues and many more, will ultimately give everyone the same legal power as the richest in society.”

The new broad range of capabilities for DoNotPay will not be found on Facebook Messenger, since the chat app does not provide end-to-end encryption, Browder said.

DoNotPay was able to expand geographically because about six months ago the company brought in four lawyers to support the bot across the 50 U.S. states and various regions of the United Kingdom. DoNotPay now serves up advice based on your location.

If DoNotPay fails to meet someone’s specific legal goals, Browder and his small team of lawyers may still be able to refer the person to a resource, law firm, or charity that’s willing to help.

“This is great for the user because it means everyone coming to our site can get some level of help, and its great for us because we can figure out what areas we should be working on in the future,” he said.

How DoNotPay, a bot with altruistic goals, will pay for its own continuing operations has always been in question, but Browder said his company is beginning to move toward monetization.

“There might be another way to monetize around corporations sponsoring bots, and I’m in early discussions with huge corporations,” Browder said. “So, for example, if you’re the biggest car dealership in Los Angeles, why not sponsor the parking ticket bot for LA to help you build that brand. I think there are a lot of brand-sustaining [possibilities], but I would never want to charge [users].”

Corporate sponsors will not interfere with the operation of DoNotPay bot, Browder said.

First created in 2015 to challenge parking tickets, the bot has grown to include legal services for people with HIV, refugees applying for asylum, homeless youth in need of housing, and airline passengers looking for compensation after being stuck on the runway.

Earlier this year, Browder’s company was one of 10 chosen to be part of the inaugural class at All Turtles, an AI startup studio founded by former Evernote CEO, one-time early-stage bot investor Phil Libin, and others.