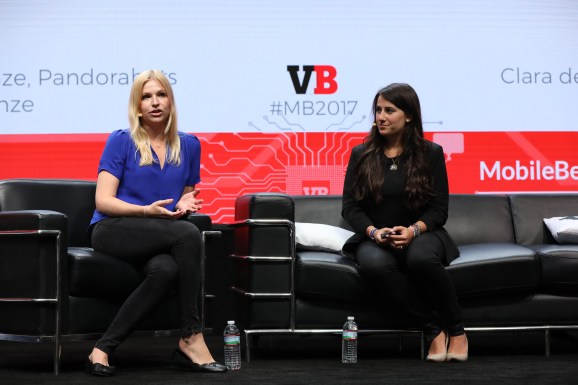 Lauren Kunze, the CEO of Pandorabots, and Clara de Soto, the cofounder of Reply.ai, at MB 2017

It’s easy to start an AI company. All you need is an idea and some funding, right? Not so fast, say two experts who are known for building well-known conversational UI platforms. It’s a difficult and time-consuming process, one that requires extraordinary effort. And it is a highly competitive market. Funding alone won’t make it work.

One big lesson: You have to know what you’re getting into. Building an AI company is not like a blind date. It should involve a great deal of research and planning, even though that’s sometimes not the case.

One example from a high-profile company: Microsoft created the disastrous Tay chatbot on Twitter without doing due diligence, even though the tech giant obviously had the resources to make it work. Because AI is built by humans, the products and services must be well-tested, follow a business plan, and appeal to a specific target market…or else. (No one ever did figure out why Tay existed.)

Because building an AI company is so hard, it’s worth exploring what has actually worked and looking at what missteps have left bumps and bruises on the companies that didn’t quite understand what it takes.

Lauren Kunze, the CEO of Pandorabots, and Clara de Soto, the cofounder of Reply.ai, both have extensive experience starting companies and building out AI platforms that actually work and that people use on a daily basis. In their closing keynote at MB 2017, these well-known figures in the AI world explained why there are so many battle scars on the road to success.

“You can’t build anything of high quality in five minutes,” said Kunze. “At the same time, you should strive to launch quickly, after one to three months of initial development, because once you release conversational software, people are going to say completely unexpected things, and most of the work happens after launch. You have to continually optimize the system and have a clear plan for optimization using dedicated human resources.”

In the presentation, Kunze and de Soto explained some of the “gotchas” involved in birthing an AI company. One of the real killers? Many founders don’t do a good job defining what they are actually creating and laying out clear expectations for delivery. The bot will rule over Alexa and the Google Assistant! It will power your entire home! Good luck with those goals, they said. Amazon and Google have more money than you do, and they have already overshadowed most AI-driven text interfaces.

How about not defining a business case? Or hiring the wrong team? Some founders spend way too much time and money trying to build a product. Meanwhile, the industry moves on and your travel chatbot that can book a flight suddenly seems ridiculously out of date. (Or it takes a back seat when Kayak does a better job.)

Awesome.ai is one example of a company that hit the limelight and then couldn’t make figure out how to raise more funds. And it’s not alone. Many startups are lured into thinking the process can be a quick and easy.

“The way we see it, you’re never just ‘building a bot’ so much as launching a ‘conversational strategy’ — one that’s constantly evolving and being optimized based on how users are actually interacting with it,” explained de Soto.

Kunze said there is no way a company is going to just go out and acquire machine learning algorithms that will yield a 10 percent lift in their business or build an AI without a lot of effort. One company wanted her to build the Chinese version of Jarvis — the character from Iron Man. They didn’t understand that the primary user of that bot is a fictional character.

“Conversational AI is a very hard and expensive problem,” said Kunze. “Siri, Alexa, and Assistant have thousand-person teams. Businesses and developers both have limited resources and time constraints. It’s better to do one thing really well than a lot of things really poorly.”

De Soto said another example of building it right is to focus on what bots do best — like customer service. “Aside from optimization, it’s critical to be disciplined about what business case you’re solving — we’re very bullish on the pain bots can solve in customer service, where bots and AI can not only cut costs but also generate revenue by providing personalization at scale,” she said.

In the end, the scars any company founder experiences can also be a motivator. There is a long process involved in creating a chatbot or an Amazon skill that people use and an even longer road to travel before you can turn the company into a powerhouse — or even make a profit.

According to Kunze and de Soto, the companies that assemble the right team to define what their bot will do and that know how to see the evolution through to the end are the ones that will stand a chance against the AI giants.

They concluded with a final word of advice that was perhaps most interesting of all. A good way to be left behind? Do nothing at all.