Here’s a bolt out of the blue: Uber is partnering with Yandex, the Google of Russia, to launch a new standalone company that merges their respective ride-sharing services to target Russia, Kazakhstan, Azerbaijan, Armenia, Belarus, and Georgia.

Though Yandex is perhaps better known for its online technologies across Russia and nearby regions, it has actually operated an Uber-style taxi-hailing app for a number of years already, and it recently announced it was slashing its prices to stay ahead of the local competition, which includes Uber and Gett. Uber, for its part, has faced stiff regulatory hurdles in Russia and though it was given the green light to continue operating in Moscow last year, it was restricted to only using licensed taxi drivers.

As a result of this new deal, Uber is investing $225 million into NewCo, with Yandex only stumping up $100 million and the post-money valuation pegged at $3.725 billion.

That Uber is putting more cash into the new company, yet is only gaining a little more than one-third of the ownership, indicates that Yandex holds a much larger share of the local market, and Uber has effectively failed to overturn the incumbents. Indeed, according to a set of slides issued by Yandex, it is currently on track to do 285 million rides in 2017 across the various regions, while Uber is on for more than half of that, at around 134 million. 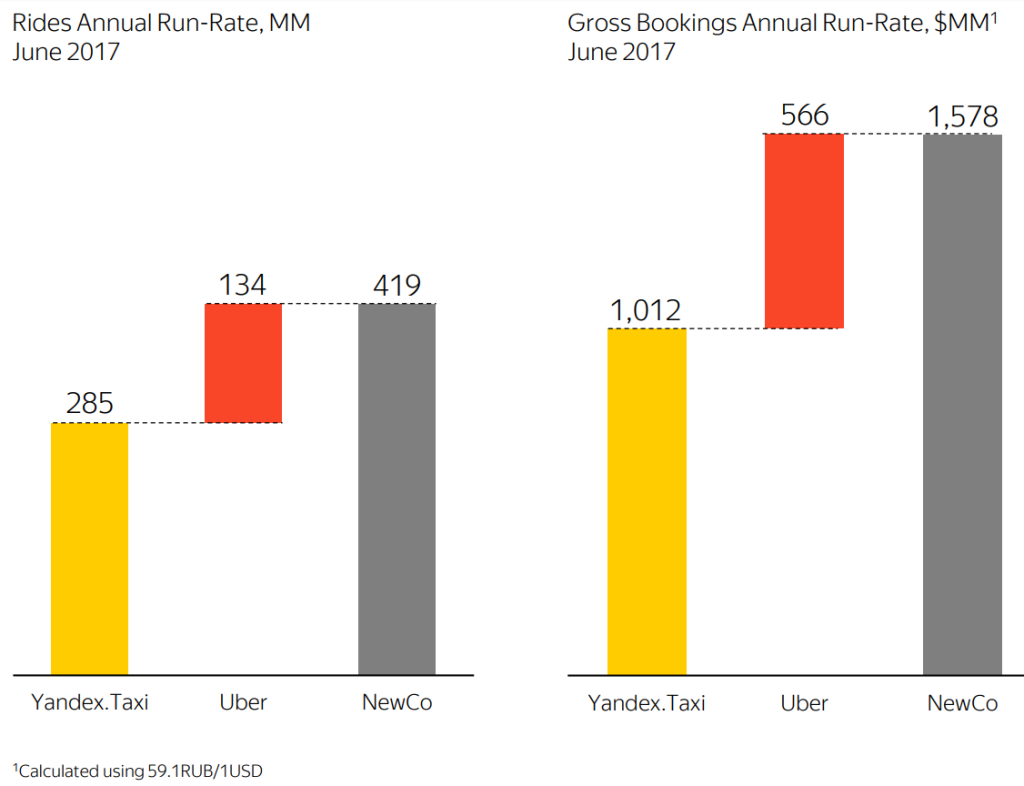 Above: Uber vs. Yandex

The announcement also echoes a similar move Uber made in China last year, when it chose to be swallowed by local etaxi giant Didi Chuxing in a $35 billion deal rather than continue to haemorrhage cash in its efforts to infiltrate the local market. The more modest nature of this latest tie-up with Yandex reflects the smaller market in question, but it also goes some way toward improving Uber’s balance sheet.

“Combining our business with Yandex will give us a very significant stake in a new company which will initially serve more than 35 million trips each month and operate in an incredible 127 cities in six countries across the region,” explained Pierre-Dimitri Gore-Coty, Uber’s head for EMEA, in an email sent to employees. “Uber will also have three of the seven seats on the new company’s board and — together with the $225 million cash investment we are making in the new company — our 36.6 percent ownership stake will be worth almost $1.4 billion.”

The new company — which will be headed up by Tigran Khudaverdyan, who currently serves as the CEO of Yandex.Taxi — will also tap Yandex’s existing technologies, including maps and navigation.

Once the transaction is complete, which is expected to happen in Q4, riders will be able to use both Yandex and Uber apps, but the driver apps will be integrated, “leading to shorter passenger wait times, increased driver utilization rates, and higher service reliability,” according to a separate Yandex statement.

It’s also worth noting here that Uber’s and Yandex’s boards of directors have already approved this deal (as you’d expect) and shareholder approval isn’t required — the only potential sticking point would be regulatory approval.