Pay-per-mile car insurance service Metromile is touting a new “first of its kind” automated claims system designed to speed up the process of verifying and paying out claims.

Founded in 2011, Metromile operates across a number of key U.S. states, including California, Illinois, New Jersey, Oregon, Pennsylvania, Virginia, and Washington. The company offers a device called the Metromile Pulse, which drivers plug into their car to monitor their time on the road. Connected to this, Metromile also offers car insurance that has a pipeline into Metromile data to offer insurance based on the number of actual road hours. This is perfect for ride-sharing services such as Uber, which Metromile previously partnered with to let drivers pay insurance only for the time they’re on the roads.

Using similar data derived from Pulse, Ava can reconstruct the scene of an accident to determine what happened. If the data backs up the claims made by the driver, the company said that it’s able to automatically approve payments “within seconds.” 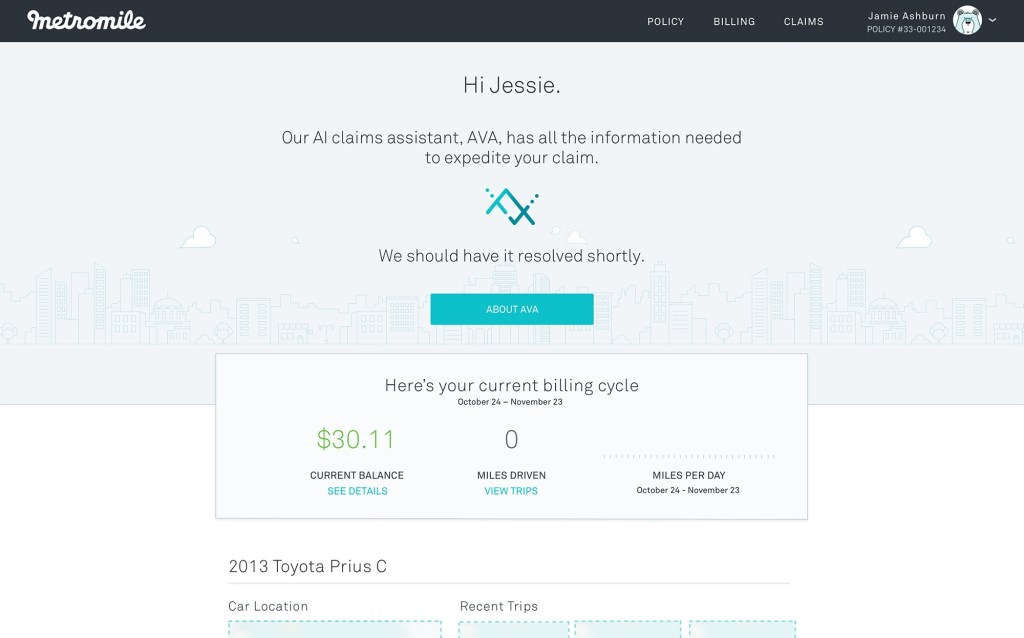 If Ava detects something that doesn’t add up, it then flags the file for a human reviewer within the in-house claims team. The company said that Ava will only be able to deal with “certain claim types” at first, though it didn’t divulge what those will be — we have sought clarification and will update here when we find out.

“Instead of relying on traditionally complex processes to handle customers’ claims, our machine learning platform removes the friction associated with getting your car back as soon as possible,” explained Metromile CEO Dan Preston. “The future of insurance is frictionless and fairly priced, which is all enabled by smart use of data. Ava enables us to automate traditional claims handling tasks, allowing our adjusters to do what they do best, service our customers.”

Metromile has raised north of $200 million in funding since its inception, cash that was used — in part — to acquire an insurance carrier called the Mosaic Insurance Company to allow Metromile to underwrite its own policies.

Other insurance companies are also turning to automation and AI to expedite the claims process. Lemonade uses chatbots to guide claimants through the claims process, while Sure uses an AI-powered “robo broker” to help users find the best insurance.