“Uber for trucking” logistics startup Convoy has raised $62.5 million in a series B round led by Y Combinator’s Continuity Fund.

Founded out of Seattle in 2015, Convoy’s on-demand platform serves to connect shippers with carriers (trucking firms). The company is setting out to build “the world’s largest network of reliable trucks,” with real-time shipment tracking available through apps and full pricing provided up front. It also provides data to help shippers improve and optimize their supply chain.

“Ask any shipper or truck driver about their business and they’ll point out a dozen things that could run better,” noted Convoy CEO Dan Lewis, in a press release. “Technology is changing this. Now people are excited about the possibilities for innovation. Convoy’s mobile app and automated brokerage raise the bar for service reliability and reduce wasted miles — increasing revenue and improving operations for everyone involved.” 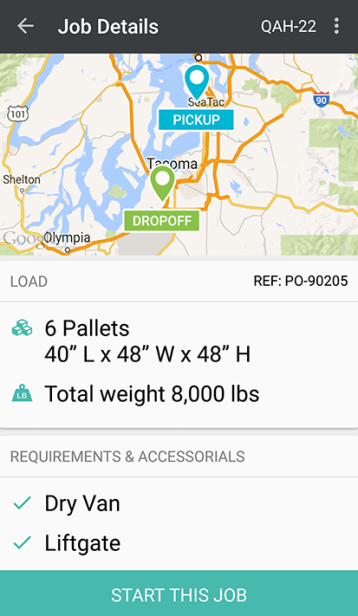 Convoy is one of a number of companies striving to disrupt the billion-dollar road freight industry. Peloton raised $60 million to improve truck platoon safety and efficiency through automation, while KeepTruckin raised $18 million for a device that lets truck drivers track their hours and trucking companies see where their fleet is in real time. Other notable trucking startups include Embark, which recently debuted its self-driving truck tech that eases driver fatigue on long highways, and Einride, which earlier this month launched its T-pod prototype, an autonomous electric truck that can also be controlled remotely.

Given that the majority of road freight involves regional, short-haul journeys, many of the competitors operate mainly in a single market. Other companies in the field include New York-based Transfix, Mountain View-based Trucker Path, Brazil’s Cargox, and a bunch more from around the world, including Europe’s Convargo (France), Chronotruck (France), and iCanDeliver (Netherlands).