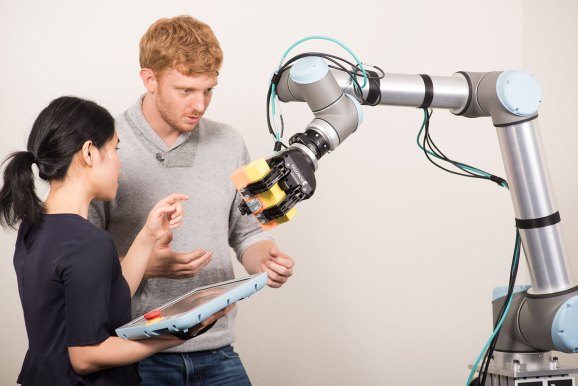 Vicarious, which is working on narrowing the gap between human and artificial intelligence, announced today that it has raised $50 million in a round led by Khosla Ventures.

The Union City, California-based startup is using computational neuroscience to build better machine learning models that help robots quickly address a wide variety of tasks. Vicarious focuses on the neocortex, a part of the brain concerned with sight and hearing.

“We aren’t trying to emulate the brain exactly,” wrote Vicarious cofounder and CEO Scott Phoenix, in an email to VentureBeat. “A good way to think about it is airplanes and birds. When building a plane, you want to borrow relevant features from birds, like low body weight and deformable wings, without getting into irrelevant details like feather colors and flapping.”

Phoenix adds that in the long run he expects the technology to be on robots everywhere — manufacturing, agriculture, food preparations, logistics, and more. One of the startup’s more obvious competitors is DeepMind, which was acquired by Google in 2014.

Vicarious isn’t publicly disclosing information about how it is making money or who its customers are at this stage, but the startup has been funded by a series of notable investors, which include Elon Musk, Mark Zuckerberg, and Ashton Kutcher.

“For over a decade, robots have possessed the physical dexterity necessary for a wide range of tasks but are limited by their reliance on expensive hand-coded software and high-precision mechanical parts,” said Vinod Khosla, partner at Khosla Ventures, in a statement. “The software that Vicarious is building will help change that.”

Today’s fresh injection of capital will be used to continue expanding the research team, says Phoenix. The chief executive informed VentureBeat that previous investors participated, but he refused to share specific names.

To date, Vicarious has raised a total of approximately $120 million and the startup currently has 50 employees.