Website- and app-tracking analytics company SimilarWeb has raised $47 million in a round of funding led by Israeli investor Viola Growth, with participation from Saban Ventures, CE Ventures, and others.

Founded out of Tel Aviv in 2007, SimilarWeb gives developers and publishers tools to garner insights about their traffic and that of their competitors. The company had raised $65 million to date and with another $47 million in the bank plans to expedite its international growth and “drive rapid innovation,” according to a company statement. More specifically, SimilarWeb said that it’s aiming to grow its teams in Tel Aviv, San Francisco, New York, London, and Tokyo, in addition to opening new offices elsewhere around the world.

SimilarWeb offers a number of products and services, but SimilarWeb Pro is its flagship offering that allows anyone to benchmark their own website against any competitor in terms of visits, bounce rate, and time spent on site. It also surfaces audience interests (i.e. other websites they visit in a single session), SEO keywords, and traffic sources, while its API allows third-party apps to siphon its data. 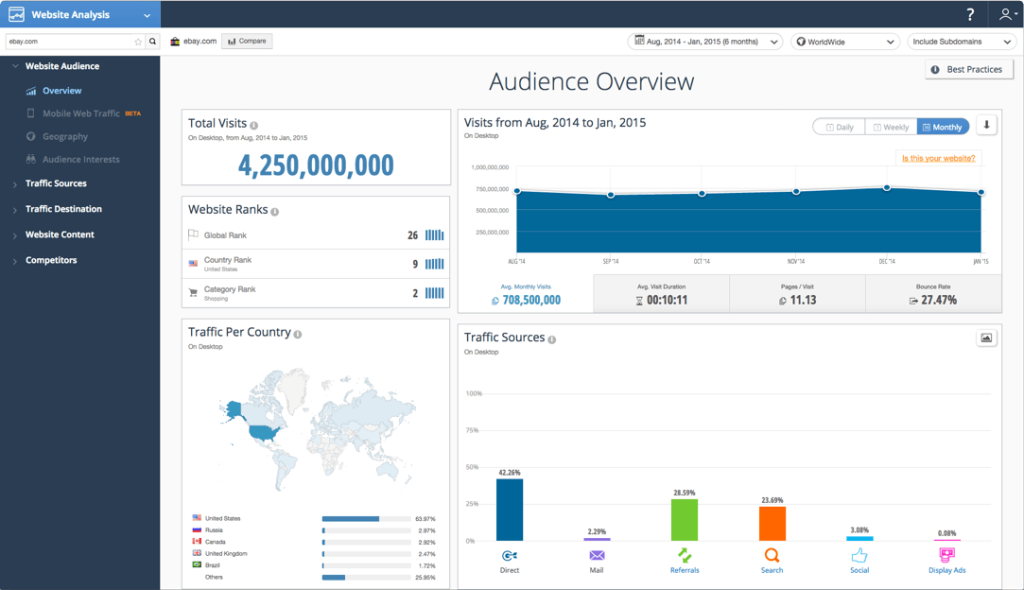 App analytics and intelligence is a major business, boasting such notable players as App Annie, which has raised $157 million in funding and snapped up Distimo and other rivals. Indeed, SimilarWeb is no stranger to acquiring complementary services itself — back in 2015 it bought Quettra, a mobile intelligence startup that helps app developers get more data about their users, including demographics and brand affinities.

And last November, app intelligence startup Apptopia raised a $2.7 million round of funding from some big name investors, including Ashton Kutcher and Mark Cuban.

SimilarWeb claims that “more than half” of Fortune 100 companies use its products, with customers including Microsoft, Samsung, Airbnb, Deloitte, eBay, and Pinterest.

“The digital market intelligence space continues to grow exponentially and is increasingly disrupting the $68 billion market research industry, as well,” noted SimilarWeb CEO Or Offer. “SimilarWeb has emerged as the industry standard in market intelligence, redefining the way companies across the spectrum assess and maximize their market share. We are in a strong financial position — doubling revenue over the past 12 months — and with this investment will continue to meet the increasing demand we see for our solutions from brands and agencies around the world.”