When your first home stereo product costs up to $24,000, and your next product starts around $2,000, then it’s fair to say you’re targeting an elite range of audiophiles.

Traditionally, that’s certainly been the case for Paris-based Devialet. But as the company has evolved and launched its first consumer product, the Phantom, in 2015, it has continued to search for ways to expand the reach and affordability of its advanced audio technology without compromising the sound quality.

Last year, when the company announced it raised $106 million in venture capital, it also revealed that it planned to start working with partners to put its audio tech inside of other products. In late July, Devialet announced the first product to results from its new partnership strategy: the Sky Soundbox.

Costing around $325 for customers of Sky, the company sees it as a way to let new customers experience the power of its audio technology in the hopes they will be curious about the company and its other products.

“From the beginning, our goal is to put our technology in any device providing sound,” said Devialet CEO Quentin Sannié. “With Devialet brands and with our distribution, we are not able to reach a million customers right now.”

Founded in 2007, Devialet’s first products were dubbed “Expert,” and they consist of a family of amplifiers that range in price from $5,500 to $24,000, and were sold via partners. And yes, that’s for just one component of a larger stereo system. Devialet became a renowned name for super-high-end audiophiles, but it wanted more.

After years of development, the company released the portable $2,000 Phantom speaker in 2015, the first product it would sell directly to consumers. Still not cheap, the price was low enough to reach down another layer to users who would appreciate the luxury and power of a well-designed speaker. 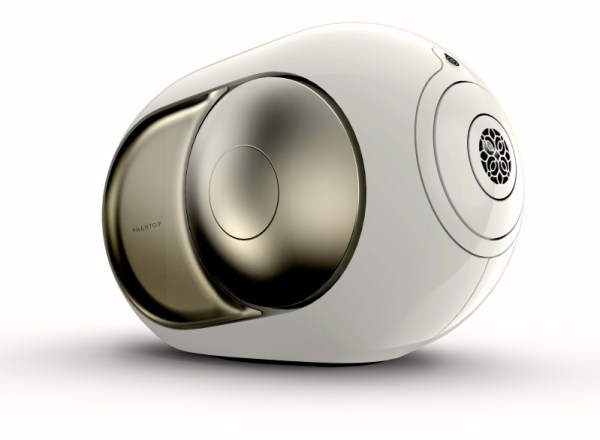 Since then, the company has been opening boutique stores for people to try the Phantom. Sannié said the company expects to have 50 stores open by the end of the year in 10 cities. In the U.S., that includes New York City, Los Angeles, and San Francisco. In addition, Apple sells the Phantom in many of its stores.

Sannié said the company expects to sell 50,000 Phantoms this year, double the number from last year. “And our goal is to double every year,” he said.

Still, that strategy has its limits. So last year the company began to pursue partnerships. The goal was to take the basic sound technology in the Phantom and find ways to adapt it to cars, televisions, and Internet of Things devices.

The Sky Soundbox is the first product to emerge from those efforts. It was developed in partnership with Sky, the UK broadcasting giant, which will focus on selling it to its subscribers to enhance their television-watching experience.

Devialet considered working with TV manufacturers. But that could have forced the company to dramatically limit its technical options to shoehorn it into a TV. Building a box with a content provider like Sky seemed a better option.

“The idea is to be able to have a single box that provides the full sound experience,” Sannié said. “The main goal of Sky is not to sell devices, it’s to sell subscriptions and content. The goal of this is to improve the experience and keep the consumer with Sky.”

Anyone can buy the Skybox from Sky at a price of $1,053 dollars. But Sky is offering it at a deep discount of $394 to its subscribers.

Devialet hopes that partnership gets its technology into more homes at a faster clip.

“Our bet is that a lot of consumers will discover Devialet through this product,” Sannié said. “And they will really be surprised by the immersive experience of this product. It’s a way for us to continue developing our relationship with the customer.”

Sannié said the company wasn’t ready to release the names of other partners, or other audio devices in the works. But the company is ramping up its hiring. From 125 employees in 2015, the company now has about 350, on its way to a goal of 500 by end of 2017.

Those people are hard at work developing Devialet’s own brand-name products as well as working with partners. Sannié wouldn’t hazard a guess as to how big its partnership business would be, but growing it rapidly will be a key to long-term success and moving beyond a high-end niche.

“Our goal is not to be just a luxury brand for just a few people,” he said. “We want to be able to reach a mass market.”