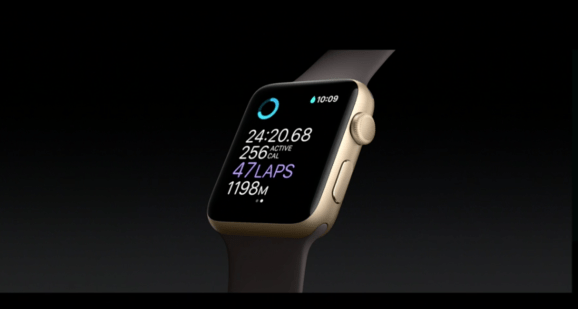 With investors ready to drive Apple’s stock to a new record high today, it’s safe to say they’re pretty satisfied with the results of the company’s earnings report yesterday.

The headlines are all about revenue growth, iPhone sales, and expectations for the next iPhone. But in the conference call with analysts yesterday, and the earnings release, the company revealed some interesting nuggets for Apple watchers.

1. Apple Watch: Apple CEO Tim Cook said Apple Watch sales grew 50 percent in the quarter compared to the same period one year ago. He didn’t give the underlying unit sales. But it’s a fair bet that the company is continuing to increase its lead as the world’s largest smartwatch seller.

“It’s the #1 selling smart watch in the world by a very wide margin,” Cook said. “Apple Watch is having a positive impact on people’s health and daily lives, and motivating them to sit less and move more.”

2. Apple TV: This product is part of the same “Other” category as Apple Watch. It also includes Beats products, iPods, and Apple-branded and third-party accessories. Revenue in this category increased 22 percent for the quarter. So if Apple Watch sales jumped 50 percent, it would follow that other gadgets fell. Apple TV seems to be struggling so much that even when prompted by an analyst, execs didn’t say much about it. By the way, this category will likely get even more muddled when Apple starts selling its HomePod later this year.

3. AirPods: These would also be lumped into the “Other” category. Cook noted that there is “incredible enthusiasm” for AirPods, with 98 percent customer satisfaction, based on the Creative Strategies’ survey.

“We have increased production capacity for AirPods and are working very hard to get them to customers as quickly as we can, but we are still not able to meet the strong level of demand,” he said.

Now, this product didn’t exist a year ago, so it also accounts for at least some part of the “Other” growth, which reinforces the notion that legacy products like Apple TV are suffering.

4. iPad: The tablet ended a 13-quarter losing streak by posting a 15 percent increase in unit sales. But iPad revenues only increased 2 percent. So while much attention has been given to things like the iPad Pro, the reality is that Apple turned things around by selling more of the less-expensive versions.

5. “Large” Autonomous Project: The company remained circumspect when asked about plans in this area. But Cook did say: “In terms of autonomous systems, what we’ve said is that we are very focused on autonomous systems from a core technology point of view. We do have a large project going and are making a big investment in this. From our point of view, autonomy’s sort of the mother of all AI projects. And the autonomous systems can be used in a variety of ways, and a vehicle is only one.”

6. Hiring: The company has been under pressure from President Trump for its outsourcing of manufacturing. Trump turned up the heat by announcing that Cook had told him Apple was going to build three factories in the U.S. When asked about this on the call, Cook did not respond directly but instead highlighted the numerous ways Apple contributes to the U.S. economy.

He also pointed to Apple’s new manufacturing fund, which is being used to help other companies expand various production capabilities. And then he seemed to hint that there was something else big coming later this year regarding Apple’s U.S. employment.

“We have about two-thirds or so of our total employee base is in the U.S., despite only a third of our revenues being here, and we’ll have some things that we’ll say about that later in the year,” Cook said.