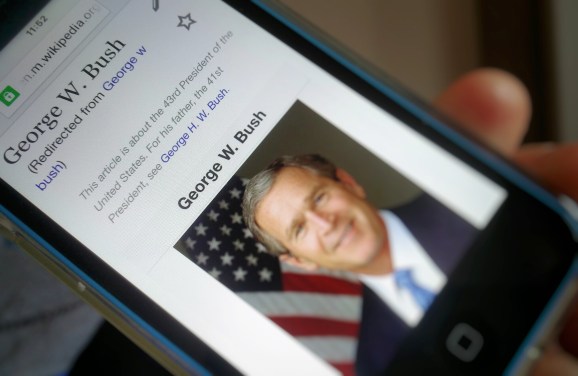 There has been a tiny, yet fierce, war raging behind our technology: the bot brawls. For years, bots on Wikipedia have been staging fierce incursions against each other, undoing each other’s work in a continuous cycle of competing raison d’êtres. These skirmishes went widely unnoticed by humans until a few months ago.

Anyone can submit a bot on Wikipedia, and if approved it can go out and edit 40 million articles all on its own. If its tasks are in opposition to another bot’s tasks, only their creators can call off the warring bots. The burgeoning bot society is missing one crucial function: police. And if we don’t implement order in the bot world soon, we’ll find that we’re missing more than just an Oxford comma.

The next battleground: communication

While the vendettas of editing bots on Wikipedia are, ultimately, both harmless and funny, the implications of these battles extend far beyond the addition and subtraction of a link.

In the era of ambient computing, AI, bots, and humans will need to interact seamlessly with each other across platforms, devices, and tasks. Several small firms are developing products that recharge mobile devices with power sent through the air. Google has changed its mission to be “AI first.” Facebook has a secret team devoted to using the brain to type and control augmented reality devices. When these projects manifest in everyday life, there will have to be a way for bots to end their wars.

Take Clara, a virtual assistant bot that completes tasks by communicating with other people’s bots: If Clara gets into a battle with another bot, then her abilities become null. Again, this can seem low stakes — it’s not that big of a deal if she gets confused about a meeting. But as ambient computing looms, the stakes increase: What if the bot that controls your home security clashes with the virtual assistant that controls your thermostat and coffee maker?

In an increasingly interconnected world, bots need to learn a new language, one that, as David Moss said, “enables bots to talk privately with each other, without exposing information about the user to the outside world. This would effectively keep them from fighting and allow them to do more communicating, coordinating, and reasoning on behalf of the user in order to learn how to run their home.”

There are two components to policing bot interactions. The first is creating a language for different bots to communicate with each other to avoid the ad infinitum nature of the Wikipedia Wars. The second, though, is to have a means by which humans can police the interactions between their own bots.

Currently, the interface between humans and bots is chat. But with services like Siri and Alexa, there arises a new interconnectedness between bot interactions that makes the ability for them to seamlessly function alongside each other much more important. When a user asks Alexa for something, they’re not clicking on an interface — they’re asking Alexa to mediate a relationship between different products and services to deliver an outcome.

Inevitably, situations will arise where a request causes a dispute between bots. When this occurs, the bots must have a means of communicating needs with each other and coming up with a compromise. Sometimes this will work. Many times, however, especially when these technologies are in their infancies, “compromises” will end up not actually giving the user their intended outcome. And that’s when you need human police.

We currently conceive of customer service as the human mediation between a customer and a product. With ambient computing and bots, the language of customer service will change: It will be about mediating the relationship between the user and the various products needed to fulfill the user’s request.

In an interconnected world run by voice-operated interfaces, having customer service exist in siloed products doesn’t make sense. If the user is accustomed to simply asking Alexa to fix something, then going into a screen interface to ask for help on each product is a massive user experience barrier. In the world of ambient computing, customer service will be the human-facing side of getting bots to effectively communicate with each other.